One of the lesser known features of the MetaTrader backtester is the optimization feature. It’s so small that you could be forgiven for overlooking it.

The process is identical to running a backtest, except that MT4 runs multiple backtests at the same time. It then organizes the results and offers up the best combination.

Telling the backtester to run in optimization mode is easy. Simply put a check next to the word Optimization. MetaTrader will then sort through the combinations that you tell it to consider. 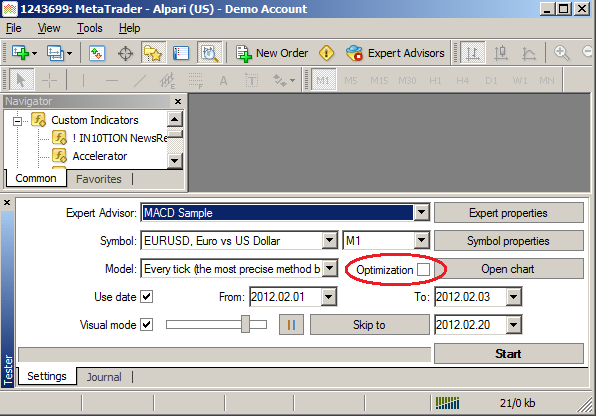 The next step is to click on the Expert properties button to the right. A new window appears that contains three tabs: Testing, Inputs and Optimization. These screens allow the trader to inform MetaTrader which variables to consider for testing and how to weight the results.

The top of the testing section applies to every type of backtest. Here you can select the starting balance. MetaTrader defaults the option to $10,000, although you can make this any amount of your choosing.

The second default option allows the trader to restrict the direction of trades. It’s a frequent expert advisor programming request. It’s also one that is unnecessary. Both the backtester and expert advisor options screen allow the trader the option of restricting trades to long only or short only without additional programming. If the EA is not well programmed, this setting may cause errors 4110 or 4100 to appear all over the trading journal. It’s harmless. The only effect should be that the backtester slows down. It’s the result of writing to the journal hundreds of times or more. 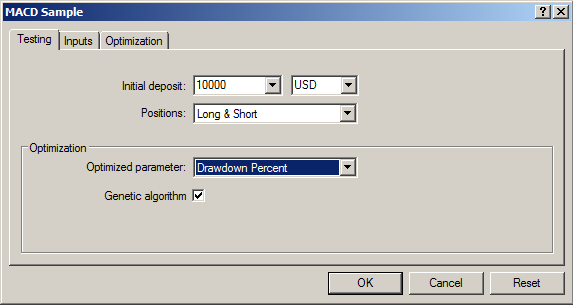 This is a great idea if you have a quality genetic algorithm. My opinion of the MetaTrader backtester is less than stellar. I don’t feel very confident about the algorithm at all. If you don’t mind spending extra time waiting for test results then I suggest unchecking this option. You don’t want to miss a potentially important combination. 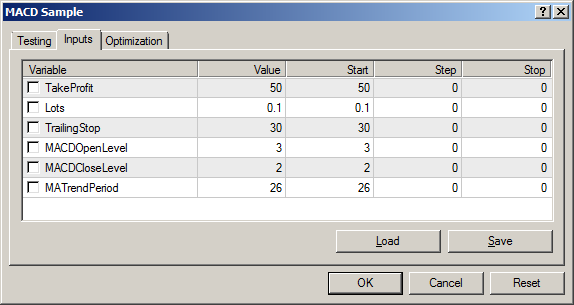 The important columns for this task are Start, Step and Stop. Start is the lowest number that the MT4 backtester will consider. Step refers to the interval between the lowest value and the highest value. Tightly controlling this setting allows the user to gain quick insights into how changing the variable values affects performance without dragging the tests out for a full week. Stop is the highest number that the expert advisor will use.

The most obvious candidate for testing in this example is the Take Profit value. The default setting is listed at 50. If you trade the majors, you might want to consider settings ranging between 10 pips and 200 pips. That means that you set Take Profit row to 10 for the Start column and 200 for the Stop column. The real trick here is selecting the Step. If you choose Step = 1, then MetaTrader will run a separate test for every value between 10 and 200. That’s 190 tests, which is overkill. A step of 10 cuts the total number of tests down to 19. 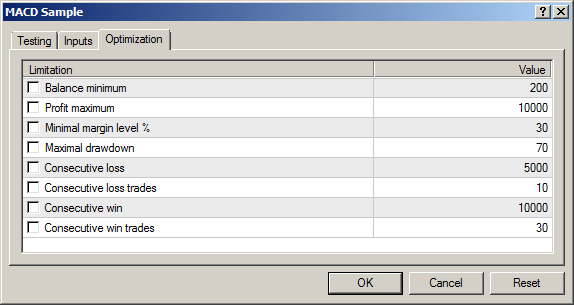 I recommend that traders pursue any strategy development work in NinjaTrader. I don’t like the idea of optimizing at all. Instead, I always focus on testing strategies for entry and exit efficiency. I know from years of experience that these values never fundamentally change on instruments of the charts traded. Entry and exit efficiencies make wonderful metrics for automated trading because they are so stable.