On the first Friday of each month the US Labor Department issues its Nonfarm Payrolls report. Among other labor-related data, that report provides the numbers of new US-based private sector jobs. The NFP, as it’s also sometimes called, is one of the few economic indicators that day traders and investors keenly watch.

Sounds simple, right? Well here’s the problem. Nonfarm Payrolls is one of the hardest indicators to predict. That makes it hard for the average day trader to choose a strategy, bearish or bullish, before the figure is released. In this article, I’ll share my tips for trading Nonfarm Payrolls which could tilt the balance in your favor.

When it comes to the NFP, Think like a Trader

The biggest mistake a trader can make when crafting this particular trading strategy is to think like an economist. Most economists have a tendency to predict the Nonfarm Payrolls figure in a logical, mathematical series, almost as a continuation from the previous number. But in real life, it doesn’t quite work that way.

As you can see from the chart below, the consensus tends to move in a straight line while the actual Nonfarm Payrolls figure tends to fluctuate. Does that look familiar? It should; it’s very much like the typical FX pair. 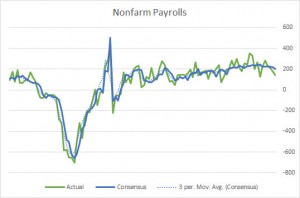 So, rather than get tangled up in a complicated statistical analysis, do the obvious. That is think the way a trader would; draw support and resistance lines. 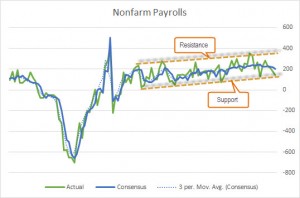 Now that you have a sense where Nonfarm Payrolls might be headed, it’s time to design a trading strategy. That’s the simple part. If you expect Nonfarm Payrolls to be a beat, then you should have a bearish trade in place. That should be on pairs such as EUR/USD, GBP/USD or any pair in which the dollar is secondary. Look for resistance levels for entry before the release and establish a bearish target.

In pairs where the dollar is a primary like the USD/JPY or USD/CHF, it’s the exact opposite. Instead, you would gear up towards a bullish strategy.

A Few Points to Consider

Before you start, here are a few points you’ll want you to consider before trading Nonfarm Payrolls.

Does the Trade Make Sense? Say you’ve come to the conclusion that NFP will go to a certain way. And you’re pretty certain how that could affect your trade. You’ll want to ensure that all other indicators, i.e. support/resistance and buy/sell signals, are there. Don’t just buy or sell because you expect a surprise or a miss. The trade has to make sense.

During a Crisis NFP is Impossible to Predict: As can be seen on the left side of the chart, there’s an awful lot of volatility. During an economic crisis, Nonfarm Payrolls often swings so wildly that you simply cannot rely on the support/resistance band.

Nonfarm Payrolls Generate Volatility: Let’s talk a bit more about volatility; you need to be prepared for it. Without preparation, even if you’re right, you could still end up hitting your stop loss. When a big miss or a spectacular beat occurs there is generally increased volatility. You will need to adjust your stop loss and trading strategy accordingly and quickly.

Do you want to create your own NFP chart? You can download the data directly from the Bureau of Labor Statistics. Lior created his chart in Excel using the numbers provided.