The thing that disappointed me the most, however, is the huge drop in the number of trades. The original strategy placed 60 trades in a 12 month period. The walk forward test only traded 22 times. 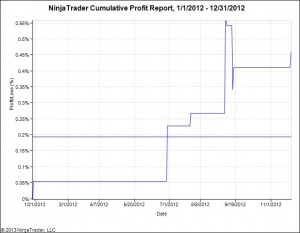 Thereafter, the pace really picks up. September 2012 showed the most activity with 12 total trades – more than half of the year’s activity happened in that individual month. 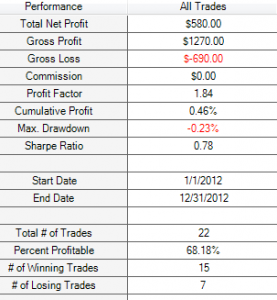 Whenever volatility drops, which forex brokers bemoaned at the Forex Magnates conference in London, the number of trading opportunities drops, too.

I allowed myself to cheat slightly where I tested the 1% setting in 2012 instead of the 1.5%. The performance showed a similar drop in the number of trades and in the profit. Importantly, however, the numbers in that sample set improved.

I like this strategy because it is stable. Changing the setting from 1.3% to 1.5% does not cause a drastic U-turn in the performance. In other words, it’s steady and predictable.

Future improvements to the strategy might relate volatility to the entry setting. When volatility is low, the 1.5% threshold might lower to 1%. As volatility rises, a band of 2% might yield better outcomes in extreme scenarios. An obvious next step would be to relate the movement of the band to the volatility of the EURUSD itself.