Scott from Scott’s Investments posted an update for his Dual ETF Momentum Portfolio this week. This portfolio allocation system is based on a paper by Gary Antonacci.

The basic idea is that the system evaluates multiple ETFs in different asset classes and takes positions in the strongest ETF in each class. If an entire asset class is struggling, the system allocates that portion of the portfolio in a cash equivalent.

Scott explains how he evaluates the momentum of each ETF:

Relative momentum is gauged by the 12 month total returns of each ETF.

The 12 month total returns of each ETF is also compared to a short-term Treasury ETF (a “cash” filter) in the form of iShares Barclays 1-3 Treasury Bond ETF (SHY).

This is the absolute momentum filter which is detailed in depth by Antonacci, and has historically helped increase risk-adjusted returns.

The “invested” signal is based on the ETF with the highest relative momentum for the past 3, 6 and 12 months. 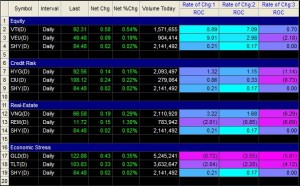 Scott’s Dual ETF Momentum Strategy divides his capital into four asset classes and takes positions in the best performing ETF in each class.

As you can see, Scott has selected two different ETFs for each of the four asset classes he has defined. He then takes positions in the strongest ETF in each asset class. If neither of the ETFs in a particular asset class has outperformed a cash positions, his third option is to simply take a position in SHY.

Scott has this system set to rebalance itself every four weeks. In his backtesting results, Scott shows that this strategy was able to match the performance of the SPY from January 2009 through January 2013, but the strategy has dramatically underperformed the SPY throughout 2013. However, it has also posted less than half of the SPY’s maximum drawdown.

It would be interesting to see how changing the number of asset classes or the number of ETFs considered within each asset class would alter the results of this strategy. It would also be helpful to see backtesting results for a longer time period.