Average True Range (ATR) represents the average range that a market moves over a given time period. Using a multiple of ATR allows a trader to give highly volatile positions enough room to run, while at the same time making sure that low volatility positions are held tightly in check. 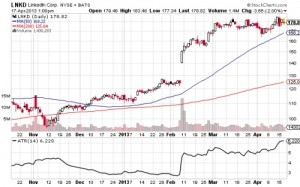 The concept of Average True Range (ATR) was originally introduced by J. Welles Wilder in his 1978 book New Concepts in Technical Trading Systems. Wilder was looking for a way to describe the historic volatility he was encountering in commodities markets.

Wilder took the True Range indicator and smoothed it out using an exponential moving average. The most common time frame for ATR is 14 days.

My reading informed me that Livermore and Loeb recommended no more than a 10% stop. O’Neil recommended a 7-8% stop. 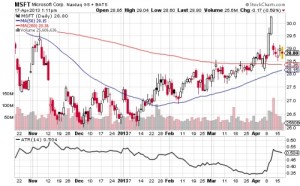 Even a novice trader can see that there is a huge difference in volatility between these two stocks. Since LNKD moves with much more dollar volatility than MSFT, it will need more room to work with if you establish a position. Conversely, MSFT doesn’t need much room at all because of its low volatility history.

ATR extends beyond setting the initial stop loss. The indicator also works for setting trailing stops as a position becomes more profitable, such as in the RSI Trend strategy. A simple application of this is to keep the stop updated to be a mutliple of the market’s ATR below the high of the position.