The first backtest results are in from segmenting my price-SMA cross forex strategy. Looking back, I really should have pre-researched this idea before publicly moving ahead. Look before you leap!

I rediscovered the same irritating problem that wasted 2 months of my life back in March 2012. I’m more irritated about finding the same results again than anything. If you were able to trade crosses over the SMA 200 without the spread, the strategy makes gobs and gobs of money. 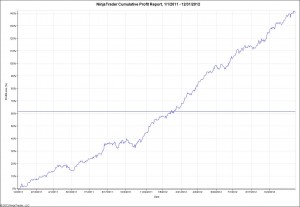 Real world trading costs including the spread and slippage works out to something like 2 pips on EURUSD. The strategy traded 29,132 times on the M1 chart to earn a profit of $118,970. The problem is that the 2 pip spread cost would have cost $582,640. The pretty equity curve costs $4 for every $1 of profit. Not good. 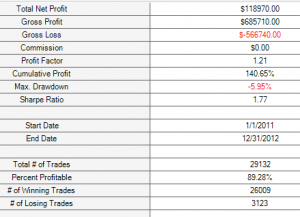 The SMA distance curve analysis didn’t turn out as I expected. There were far fewer trading opportunities away from the moving average than what I predicted – the SMA is stickier than I previously thought. No matter where I looked, the strategy always spent more money on trading costs than it earned. I posted all of the images here for the sake of thoroughness.

I’ll be moving this up to the M5 chart in the next round of tests. Everyone can say a loud, “I told you so!”

The next step is to take a quick look at the M5 charts to see if I can make the basic idea viable there.