The most critical component of any system has absolutely nothing to do with entry or exit signals. It isn’t trailing stops, portfolio allocation, or position sizing either. All of those more technical and better documented topics mean nothing without a plan to avoid the next Black Swan.

The single most important aspect of any trading system is how well equipped it is to protect your capital against a catastrophic loss. Does your system have a plan to handle such an event?

Guarding Against the Black Swan

Trend following expert Michael Covel has spent the entire year traveling around eastern Asia giving talks in an effort to promote systematic trend following. In a number of his recent podcasts he has discussed one aspect of his talk that really strikes a chord with me personally. He explains that he generally gives these talks to conservative, long only fund managers who aren’t very receptive to his systematic approach.

The audiences are surprised when he suggests that there is a Black Swan circling over our heads. He explains that we have no clue when or where it will land, but we know it will eventually land somewhere. What are we doing to protect ourselves from it? What safeguards have we put in place? Interestingly, the audience members have not put much thought into this possibility.

We know from reading the work of Nassim Taleb that Black Swans occur far more frequently than statistics suggest. Our human nature makes us prone to underestimating both their frequency and severity. 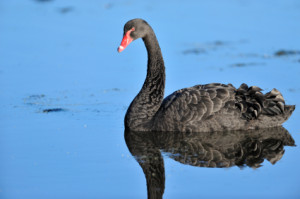 The Problem With “Conservative” Investing

My mother and her husband recently sold a rental property and netted about $60,000 on the transaction. They took that money and did what they have always been told they are supposed to do with it. They invested it in index based mutual funds. They have no clue about the risk of ruin that they are exposing themselves to because their “investment guy” told them this was “conservative.”

The problem with my mother’s “conservative” investment is that she has no exit strategy to preserve her capital. She simply plunked down all the money that she had at close to the all-time highs of the general market. Now, her only plan is to hope for the best. If a Black Swan lands in Syria next week, she’ll simply chalk it up to “bad luck” and hope for the market to rebound.

It’s possible that she has made this investment at the beginning of what will become the next great bull market. It is also possible that her index funds will be worth half of their current value by the end of the year. Either way, she has no plan in place to respond to either scenario.

Analyzing How Systems Protect Themselves

If you are reading a website about systematic trading, you obviously have more sense than my poor mother. This means you probably aren’t invested in long term, buy and hold index funds, but have you given enough thought to how your approach will handle a Black Swan scenario? How would it have fared in 1929, 1987, 2001 or 2008?

In addition to profiling a number of different trading systems on this site, I have also been paper trading a few very simple systems on my own blog. One of the most interesting aspects of this experiment has been the ability to see how different strategies react to uncertain market conditions in order to protect capital. My mother’s approach has no such protection.

Some systems, like a lot of the mean reversion systems I have profiled, don’t have any set downside protection. They could theoretically hold a long position all the way down to zero, or hold a short position to infinity. While these types of catastrophic losses have a very low probability of actually happening, Taleb suggests that they are actually more likely than we realize.

Systems like the 10/100 Long SPY Long Only, the 89/13 Breakout Strategy, and the 50 Unit EMA Strategy are all built to exit positions at certain points. While this may seem like an obvious point, it is critically important.