Back in the 1987 movie Wall Street, Michael Douglas’ character, Gordon Gekko, gave his (in)famous “Greed is Good” speech.  The thrust of it all was that greed, “greed for life, for money, for love, for knowledge…has marked the upward surge of mankind.”

The merits of that statement have been argued since Douglas first uttered it and I am not here to defend one side over the other.   My point in this article is to relate how greed in excess, greed as the prime motivator in a trader can lead to defeat.  The ultimate defeat being blowing up their trading account.

Confession Time:  Just so you know that I have had up close and personal run ins with greed, allow me to relate a story.  Very early in my trading career, I made a classic rookie blunder.  I put on a trade (way too big), seconds after NFP (way too volatile), wanting to make 20 pips on the GBPUSD.   If this trade worked out, I thought, it would make my trading week!  What a genius idea and what a genius I was to think of it!!   Well, the trade made it to +17 pips and stalled.  But, guided by greed, I held out for 20 pips (way too stubborn).  End result – I lost 23 pips (way too stupid).  Lesson on greed learned the hard and expensive way.

“Greed has cost me more than anything else.”

“How can I control greed???  That has been my number one problem in trading.”

So how do we, mere mortals that we are, go about controlling this all too human emotion of greed?

First of all, if you can identify at all with these quotes, it means you are aware that greed is negatively impacting your trading and that recognition is a BIG step toward resolving the issue.

To keep this detrimental  emotion in check, having a definite trading plan written out will go a long way toward eliminating the problem.  Keep the plan nearby where you can reference it prior to placing any trade.  The plan will be a strategy that you have tested and one that has put pips into your account over time.  By this I do not mean positive pips on every single trade since every trade will not be a winner.  But, overall, the strategy has been adding to your account size.

Now that we have the trading plan nailed down, we must – MUST – only take trades that fit that plan precisely.  If the trade does not measure up, we don’t take the trade – simple as that.  We only want to take higher probability trades that are based on our pre-determined plan.  This will eliminate randomly jumping into trades based on emotion because “it kind of looks OK”, or the “I just like to be in a trade” syndrome. 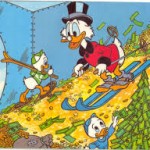 Also, always trade with a 1:2 Risk Reward Ratio in place.  This means if you’re risking 50 pips on a trade you should be looking for at least 100 pips of profit on that trade.

(Later articles and commentaries will specifically and in detail address the concept of Money Management in trading.)

Lastly, once the trade has triggered with stops and limits in place – I cannot emphasize this next point enough – LEAVE IT ALONE!!  Just let the trade play itself out according to the original parameters you put into place prior to being in the trade…when emotions were non-existent.

Take a minute and let this sink in…

When you were looking at the charts, checking for trends, support and resistance levels, relevant  fundamental announcements and the like, you were totally without emotion.  You had no “skin in the game” at that point. The plans that were put together at that time were based on facts.  Once the trade is entered , however, emotions can shift into high gear as money – your money – is on the line.  Making changes to a fact based, emotionless trading plan based on moment to moment emotional shifts induced by price action in the market is not a prudent way to trade.   It is a deadly way to trade.

Managing and dealing with the emotion of greed is not something that will be resolved over the next couple of trades.  However, by being conscious of how greed can negatively impact your trading and implementing the former ideas as part of your trading regimen, you will be taking positive steps toward the goal of greed free trading.

All the best and good trading,
Richard Krivo