For nearly every trader, there is one, all-consuming question: how do you build a profitable strategy?

Naturally, one would expect to dive straight into the statistics and begin crunching the numbers. Yet, before we delve further into the mechanics – and believe me there are plenty – I want to talk a bit about the philosophy and, indeed, the rules behind a good strategy.

With all the numbers needing to be crunched, it’s unquestionably important to have a rough sketch of your ideas for building a strategy. Only with that rough sketch in hand can you then move onto the blue prints of actually constructing a sound, viable strategy.

There is No Perfect Trading Strategy

Having said that, let’s get something perfectly clear and out of the way: Your first rule of trading is to understand that there is no perfect strategy. But don’t let that stop you from crafting the best trading strategy possible. There are some steps to take before you even begin to draft your strategy.

If you hope to one day be able to gauge the market you need to first find your philosophical starting point. That is the acceptance of a single immutable truth which you must first embrace.

Before you dive into the practise, the data to the equation and, of course, the money, you need a reference point. And that reference point is simply this: The market has a heartbeat.  That means there is no one-size-fits-all strategy that can predict the market each and every time. That’s because the market is not static; it’s constantly moving and the rules are constantly changing.

Many, many times I’ve seen traders try to optimise their strategy to account for every conceivable condition. The next thing you know, they’ve not only lost direction but they’ve lost a bundle. As I’ve said, no single strategy works all the time. Thus, building a successful strategy calls for you to predict the market at certain very specific points. Moreover, you need to recognize the “dead zones” where the strategy is not predictive, and make it a point not to engage.

Stick to the Rules

Your second rule to producing a viable trading strategy is to have clear mechanical rules of engagement. That is, clear conditions as to when you open a trade and when you close a trade. And you need to stick with that rule, no matter what. If you allow any leeway you actually change the mechanism, thus making it impossible to measure.

Let’s say your first rule of engagement looks like this: When the 120 days EMA crosses the 60 EMA from above, you buy. This time, though, it appears to you that the pair you’re trading is still bearish. You decide that you’re not going to open a trade after all.

Though in this instance it was the right call, you’ve interfered with the rules. Thus the results you got are not a byproduct of your strategy. Instead, they’re the result of your judgment call. When a trader interferes with the rules of engagement they eliminate the ability to assess its effectiveness. So why is that a tragedy?

Because it means you’ll never know where you’re really getting it wrong. And if you never learn from your mistakes you’ll always make them. This is the most dangerous, even lethal, pitfall, and one that has burned thousands of traders with so-called “good strategies.” So, if you want to make sure your strategy is successful (and not just randomly successful), stick to the rules. 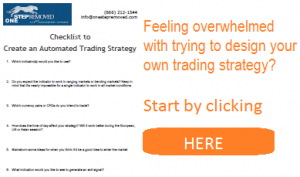 So now that we’ve established the philosophy it’s time to get down to business. How do you test whether or not your strategy is worth implementing? The testing process constitutes four different phases:

When you think about testing a strategy what instinctively comes to mind? Back testing, or testing your strategy based on historical data. But while back testing is one of the more important parts of testing, it might also create some misconceptions.

For example, if you test your strategy on an entire set of data, how will you know how it performed when market conditions changed? To tackle this problem professionals use what’s called In-Sample Out-of-Sample.

How you perform the test is relatively simple. The historical data is divided into two parts, the In- Sample and Out-of Sample. In-Sample represents about 2/3 of the testing period while Out-of-Sample accounts for the remaining 1/3. You can see how it plays out in the illustration below.

The In-Sample will be the preliminary test of your strategy, the first dry run, if you will. If your strategy doesn’t do well in the In-Sample test, it means you might have to ditch that strategy and go back to the drawing board.

However, if the In-Sample testing shows an ascending curve of returns that’s good news! It means you’ve got something to work with. Now it’s time to tighten the screws, just like a mechanic, and in the world of trading that means optimizing your strategy. 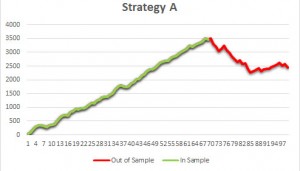 Now, optimizing a strategy is perhaps the most mathematically intensive part of carving out a strategy.  Even if math is not your forte, it’s important enough not to ignore. There are three methods we can use: Correlation, return distribution and curve fitting. Let’s look at how we’d put them to use.

Conversely, if the fast moving average is below the slow moving average then that’s a sell signal. Now, let’s say that we decide to open a position but only if certain parameters are met. The question is how can you know if those parameters are, in fact, the optimal ones? Well, that’s where our statistical methodologies will come in handy.

The first method is correlation. Essentially, you switch to a different set of parameters that better correlates to the market. Let me elaborate; say your first test or trial was 120 days for the long average and 30 days for the short average (or 120, 30). Then you tested a few more options, let’s say 120, 14 and then 60, 30 days.

Next you compare the correlation of each data set. The closer the R2 Correlation Coefficient is to 1, the better. That means this strategy is better at predicting the market. What if you get an R value that is closer to -1?

Well, that’s good, too, in its own way. It means you should be selling rather than buying, because the market is moving in the opposite direction. (Of course, with the MA crosses it’s very unlikely to get a -1 correlation anyway.)

Now, if you get a value close to 0 that’s not so good. That signals that there’s no or very little correlation between your strategy and the market. If you had positive gains on the first back testing and the correlation is 0 then the reality is your success was random and not indicative.

As you can see from the three options, our first choice was actually the best correlated to the market. That suggests that the parameters we chose in this particular case were optimal. 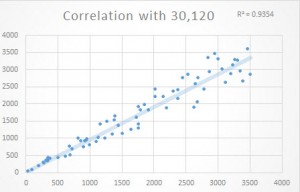 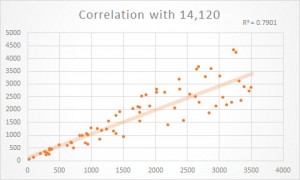 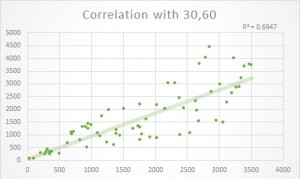 As seen in charts above, we can see that that makes for an interesting insight. Our preliminary parameters (120, 30) had a better distribution of returns, meaning returns per trade are stable rather than fluctuating. And that makes sense because it has a higher correlation to the market, as indicated by the first test we made.

Now, we get an interesting result, and one that you are likely to encounter. Our first parameters made more constant returns because the correlation to the market was higher. However, the average return per trade was lower than the second set of numbers (120,14).

To answer this question we must move to our final staple in optimization. That is to compare the curves created when using the two parameters and see which one works to our advantage, i.e. constant smaller gains or less constant bigger gains.

When we overlay the curves we get our answer: The first set of parameters (120,30) is still preferable. While having inferior results at the beginning, the high fluctuations of the second option means that your results were more random.

That randomness would eventually lead to a strategy that does not efficiently predict the market. However, if the returns on the second set of numbers were vastly superior then the volatility in returns might be worth the risk.

But in this case, the 120, 30 had proven superior returns at the end, compensating us for taking less risk and being more predictive in the market. So, now that we’ve finished our preliminary optimization we’re ready to test our strategy with the Out-of-Sample test phase. 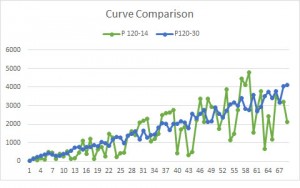 By running the Out-of-Sample strategy after the other tests you’ll gain valuable insight as to how your strategy reacts to different market conditions than initially considered.

Now we need to check the results of each. There are two different strategies (A and B) that were tested with both the In- and Out-of-Sample. As you can see, Strategy A had been rather successful on the In-Sample (2/3) but once checked against the entire data set it performed rather poorly.

In contrast, Strategy B had done well on both parts of the In- and Out-of-Sample, meaning you’ve got something viable. Thus, there is a greater chance that your strategy is what every trader wants – a money maker.

Congratulations! If you’ve reached this level then you’ve been successful in generating returns. Now it’s time to try out your trading strategy on live data. We’re not yet trading with actual money but it’s the closest thing, and should give you a good idea as to how well your strategy will perform live.

You may find that there are glitches that you didn’t at first notice. Or perhaps the entry or exit of each trade could be improved with another indicator. These are things you might only discover when trading goes live. After some adequate sampling, something akin to the Out-of-Sample length and – voilà – you’ve crafted a trading strategy.

Shaun put together a free, 6-step checklist to help traders build their own automated trading systems. It’s the same one that he used for QB Pro. If you’re feeling overwhelmed with where to begin your own strategy, then that free handout is the logical place to start.