Stochastic oscillators can be a valuable tool for mechanical forex traders. Yet, traders often use stochastics together with numerous unrelated indicators, and the results are generally ho-hum.

Like some other traders, I’ve found that using a single stochastic oscillator usually doesn’t produce consistent winners. One stochastic by itself doesn’t seem to yield eye-popping gains.

The good news is that a dual stochastic forex trading system can produce excellent results. I’ve discovered that a winning strategy can be built simply based on dual stochastic indicators, with very little else to clutter the picture.

I’ve enjoyed excellent results by using two stochastic oscillators together – one slow, and the other fast – in order to find trading opportunities.

When used with the appropriate parameters, a system programmed to monitor dual stochastic indicators can signal when the price of a forex pair is trending yet overextended during a period of short-term retracement.

This dual stochastic strategy focuses on trading when the two indicators are showing extreme opposite values. When both the fast and slow stochastics are at or near the designated limit values, it signals a trading opportunity. 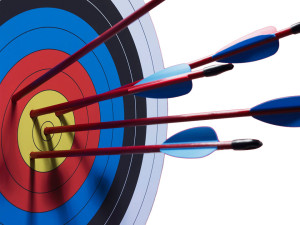 I use my mechanical trading system to watch for such conditions, and enter a trade when the price is about to revert back to the continuation of that trend. For me, it’s a good, simple forex trading system that works very well on its own, without adding other, more-complex indicators.

The background of stochastic oscillators

The first basic stochastic oscillator was developed in the late 1950s by financial analyst Dr. George C. Lane. The word stochastic itself is derived from a Greek word meaning ‘aim’ and in general finance the word usually refers to the seemingly random pattern of values around a given target value.

This easy-to-calculate oscillator was one of the very first indicators used by technicians searching for insight into price moves. It’s a momentum indicator, and it reflects support and resistance levels.

When he first developed this concept, Dr. Lane advocated the use of divergent and convergent trendlines drawn according to stochastics. And, during the earliest use by Dr. Lane and others, stochastic oscillators were usually used with other tools such as Elliot Waves and Fibonacci retracements for best timing.

With regard to trading forex pairs and other assets, the term “stochastics” refers to the location of the current price relative to its recent price range over some given period of time.

The values are plotted on a chart as one or more bands which oscillate around an axis or between a set of limit values. Mechanical trading systems and expert advisors make it easy to set up forex trading programs that incorporate stochastic indicators.

How to calculate fast, slow and full stochastic oscillators for forex trading

The basic single stochastic compares a forex pair’s closing price to its overall price range during a given period of time by using two lines or bands.

The line referred to as %K reflects the current market price for a given currency pair. The %D line serves to “smooth out” the %K line by showing the currency pair’s price as a moving average.

There are three general types of stochastic oscillator indicators used in forex trading: Fast, slow and full. The “fast” one is based on Dr. Lane’s original equations for %K and %D. When viewed in the fast version, %K looks fairly choppy. %D is the three-day moving average of %K.

During the earliest use of stochastics for trading, Dr. Lane relied on %D to produce “buy” or “sell” signals according to bearish and bullish divergences. Unlike the dual stochastics strategy, when traders use only a single stochastic indicator, they use %D by itself, and it’s called the “signal line.”

Since %D in the “fast” oscillator is used to generate signals, the “slow” oscillator was introduced to take advantage of this by itself. The slow stochastic oscillator used a three-day SMA to smooth %K, which is exactly equivalent to the role of %D in the fast oscillator.

So, in single stochastic strategies, %K in the slow oscillator equals the %D of the fast oscillator.

The full stochastic oscillator is calculated this way:

A stochastic oscillator’s sensitivity to marketplace volatility can be reduced by making adjustments to the time periods, as well as by using different moving averages for the %D value.

The most commonly-used values of N used for single, basic stochastics are time-periods of 5, 9, or 14 units. Many traders set N at 14 time-periods in order to represent a sufficient data sample for meaningful calculations. You can experiment with a different number of periods, and this may affect the results of the strategy.

%K by itself is referred to as the “fast stochastic” value. For single stochastic indicators, %D is generally set to equal a 3-period moving average for %K.

The single %D stochastic is calculated using the last 3 values of %K in order to arrive at a 3-period moving average for the %K stochastic. This creates a “smoothed” value for %K.

Since %D represents the moving average of %K, it’s called the “slow stochastic” because it reacts somewhat more slowly to forex-pair price changes than the %K value does.

When using %D by itself, there is only a single valid signal – The divergence between the price of the forex pair and %D.

Of course, for my dual stochastic strategy as outline below in this article, I use two different sets of time periods.

As indicated above, the classic stochastic calculations are based on a simple moving average (SMA). However, for the dual stochastic strategy described below, I also use an additional exponential moving average (EMA) as a separate confirmation indicator.

In contrast to the basic single-stochastic indicators described above, a dual stochastics strategy provides a greater number of winning trades.

My dual stochastic forex trading strategy is based on combining together a fast and slow stochastic and waiting for opportunities when the two different indicators are at extreme opposites. I define the extremes as being at least the 20% and 80% levels, if not closer to 0 and 100%.

The dual strategy is simple – The only other indicator I use along with the set of stochastics is a 20-period exponential moving average (20 EMA), although even that isn’t essential. Or, as an alternative, you could confirm signals by using the middle band of the Bollinger bands.

In MetaTrader, the parameters to be set for the two (dual) sets of stochastics are:

I combine both of the stochastic oscillators in the same window in the MetaTrader chart. It’s easy to do – Just place the first stochastic on the chart, then drag the other one from the window and drop it down on top of the first indicator. Then enter your settings in the dialog box.

The trading rules are easy. The mechanical trading system is programmed to wait for strongly-trending price, and watch for the stochastics to be at extreme opposites, near the limit values. For confirmation, the system looks for a candlestick pattern signaling a reversal after a brief retracement to the 20-period EMA.

The below EUR/USD chart shows some examples of trading opportunities. The circles show three prospective entry points for “short” trades in an overall downtrend. Examples 1 and 2 are clear signals. Example 3 is marginal, since the slow stochastic is just beginning to move up away from the oversold area.

In Example 1, note particularly that the slow stochastic (the yellow band) is quite oversold, and at the same time the fast stochastic (blue-colored band) has just finished moving beyond the extreme overbought limit. 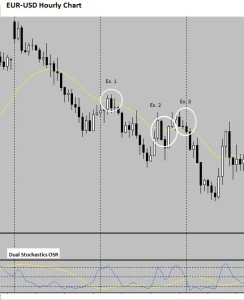 The below EUR/USD chart shows a typical “short” trade entry point during a well-confirmed downtrend. In particular, note the flat, oversold slow stochastic band (yellow), together with the (blue) fast stochastic band’s sharp downward hook below the overbought limit.

Note also that the 20 EMA was touched. The separate EMA indicator provides confirmation of the signal shown by the stochastic oscillators. As well, it’s also worth noting that even though the bearish candlestick isn’t a “classic” engulfing type, still it was confirmed by the later candlesticks. 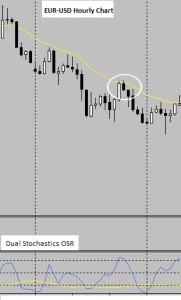 In the EUR/USD chart below, Example 1 shows a typical “short” trade. The slow stochastic (yellow) is flat and touching the oversold limit, while the fast stochastic (blue) has touched the overbought limit.

Example 2 shows a signal that looks to candlestick-lovers like a classic bearish “evening star” pattern at the 20 EMA, but still required a tight stop-loss in order to exit at breakeven. 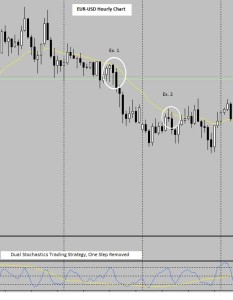 This last example above is a good reminder that the dual stochastics forex trading strategy is best used with a mechanical trading system programmed with firm trailing-stop and stop-loss rules to ensure that you ride the winners for as long as possible, while minimizing the losses.

As illustrated in the charts above, the strategy works best for me with the “shorts.” I program my mechanical trading system to enter a “sell” order for 2% of my account equity when the two stochastic bands touch the respective overbought and oversold limits, and the signal is confirmed by the price touching at or near the 20 EMA.

The stop-loss order is placed at exactly 20 pips above my entry point. The system moves my trailing-stop order along behind the current price level during successful trades, usually at a distance of 10 pips.

The main advantage of this strategy is its simplicity. Instead of relying on the “iffy” nature of a single stochastic indicator, or the complexity of multiple layers of indicators, a set of two stochastic oscillators works very well for me. The strategy is easy to understand, and it’s easy to program for mechanical trading systems.

Have you been using stochastic oscillators in your own trading?