I am extremely partial towards simple trading strategies. When the backtesting results on this simple 50 Unit EMA System came in, I could not wait to break down the results.

Simple systems pass my “mother rule.” When I explain these systems to my mother, she understands the logic behind them despite the fact that she has no interest in trading. She understands what I am doing with her money and why it is a good investment.

About The 50 Unit EMA System

Simple moving average systems are user friendly: they are easy to explain, easy to trade, and generally work well when the markets trend.

This system is no different. It uses the 50 unit exponential moving average (EMA) as a signal line. The system works on any time frame. The backtesting results use H1 bars, and our current examples will use daily bars.

The backtesting results I reviewed for this system were based on GBP/JPY trading one hour bars for the entire year of 2010. For this specific backtest, the trailing stop was set to a value of three units.

The setup triggered 33 total trades over the 1 year backtest period. Of those, 15 were winners and 18 were losers. This gives the system a win rate of about 45%.

While this isn’t as good as some of the mean reversion systems we’ve looked at, it doesn’t have the open ended downside that they have, either.

Starting with an initial deposit of $10,000, the system registered $60,621.70 in profitable trades and $34,769.37 in losing trades. Keep in mind that the system made three more losing trades than winning trades, so the profit ratio is actually a little bit better than 2:1. The overall profit factor for all trades was 1.74.

This means that a relative beginner can take this system and start trading it profitably from day one. One of the drawbacks of this system is that it suffered a maximal drawdown of 51.21% due to massive overleverage. Obviously, nobody should trade at the level of leverage in the real market.

Because this is a trend following system that works best in trending markets, we could improve our edge by making sure that our trades only occur during trending markets. The easiest way to do this is to implement a trend filter.

Since we are using the 50 unit EMA to signal trades, we could use a longer term average like the 200 unit EMA to define the trend direction. Then, we could program our system to ignore any trade signal that would cause us to take a position that goes against the major trend defined by our 200 unit EMA.

Obviously, markets don’t always trend. Many markets go through periods of sideways action that can last for years. Because of this, I would want to trade this system across a broad range of markets instead of focusing on one specific market. Adjusting the time frame to daily bars would make the system much easier to follow across dozens of equity, commodity, and forex markets. 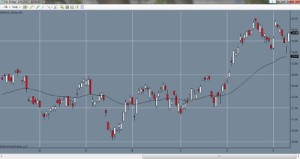 The daily chart of OIL does a great job of demonstrating both the pros and the cons of this system. Anyone attempting to use this approach trading OIL from the beginning of May through the end of June would have had a very frustrating experience. During that time, OIL was stuck trading in a range between 20 and 23. This would have caused ten different trading signals, none of which would have recorded any significant profit.

At the end of June, however, the system would have entered a long position after the price broke through the 50 day EMA line. The position would have been established around 22.50 and OIL would run as high as 25.50 by the middle of July. This trade could have cleared 10% even after giving some profit back to a trailing stop, which means it might have been enough to cover all of the bad trades from April through June. 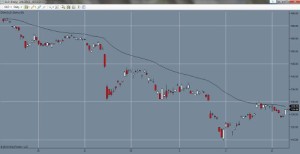 As an alternative example, GLD has been in a long term downtrend since December of 2012. It has only poked above the 50 day EMA line a few times this year and has yet to open and close an entire candle above the line. It has, however, been trading much tighter to its 50 day EMA line recently and appears to be positioning itself for a potential breakout.

If this potential breakout were to happen, we would have no way of knowing whether it was the beginning of a new bull run in GLD, or just the beginning of six months of false signals like we just saw in OIL. It would be the first signal that GLD had encountered in months, though, so it would certainly be interesting to see how it played out.

Even if the next few trades on GLD didn’t go well, we would still be way ahead because of the significant profit the system made on the short side over the first half of the year.