What are the odds that your system blows up your entire account? Probably a lot higher than you think.

Risk is one of the most important factors in successful trading. The problem with risk is that it comes in multiple levels. Many traders are able to evolve to the point where they are able to determine how much they are willing to risk on any single trade. The problem is that most traders stop there.

Too many traders never even consider the odds of blowing up their account.  This was certainly an issue I dealt with early in my career. When you’re just getting started, you are naive enough to believe that success will be easy to find. I didn’t think I’d ever come close to losing my account. I didn’t even think I’d ever have a losing streak. 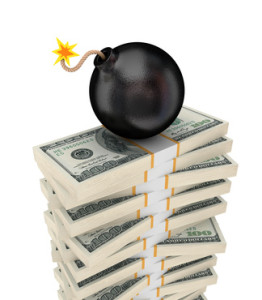 Is it only a matter of time before your account explodes?

As we evolve, we learn that all systems have drawdowns. All traders struggle at some point. The most important lesson in trading is to survive to trade another day. In order to do this, we have to calculate the odds of losing everything and adjust our trading to make sure we are able to survive. This is why we study risk of ruin.

The Three Components of Risk of Ruin

How These Components Interact

Once you have these three components, it is easy to determine your risk of ruin using a table. The ideal situation is to have a risk of ruin as close as possible to 0. In the event that your Risk of Ruin is greater than zero, then you can adjust any of the three components in order to improve it.

The other alternative is to tweak your system in a way that improves your edge. This can be done by increasing the percentage of winning trades your system can expect or by increasing the Payoff Ratio. The Payoff Ratio can be increased either by having bigger profits on winning trades or less losses on losing trades. These components are more difficult to adjust because there are more factors outside of your control.

Based on the results from historically backtesting this system on the SPY, I discovered that it would be profitable on about 41% of its trades. Its winning trades are a little better than 4 times as large as its losing trades, so I can put it in the 4-1 category.

According to the Risk of Ruin tables, if I was to use this system and risk 1% of my capital on each trade, my Risk of Ruin would be 0. Nothing is ever definite, but there is very little chance that I would go broke trading this system. The problem, however, is that this system also fails to beat out standard buy and hold strategies. There would also be an issue if the system’s Win Ratio fell below 30%. If that were to happen, Risk of Ruin would jump to 100%.