It’s no secret that one of the most important aspect of any quantitative trading system is its ability to protect capital. Profitable systems need to be able to keep losses small and let winners grow.

The question for quantitative system developers is: “What is the best way to achieve these goals?”

Many traders believe that using a trailing stop provides them with the ultimate combination of risk management and profit potential. However, there are also plenty of traders that disagree. 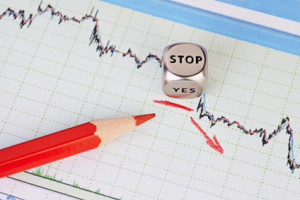 Should you be using a trailing stop with your trading system? The answer likely depends on the system itself!

Riding the Tide of the Market

A trail stop would allow the market to decide how far it wants or does not want to go instead of the Forex thinking for the market. The Forex trader thereby “rides the tide” and “goes with the flow”.

A Forex trader would be less nervous about “giving” back profits when a trail stop is used. The trailing stop helps protect the trading capital by the sheer fact that a Forex trader moves their stop loss to a level that is closer to the entry, which thereby “locks in” a smaller loss or profit.

A trail stop allows for massive wins – occasionally. These massive wins can seriously spike the equity curve to new levels.

Chris then flips the argument and lists the following reasons for using fixed stops and profit targets:

The Reward to Risk ratio is easier to calculate with a take profit because the potential reward is a given.

A take profit requires less trade management time. With clear levels where a Forex trader wants to exit the market for a loss or profit, it would be easier to create a “set and forget” mentality.

Chris continues by pointing out that the most important thing to consider when determining whether or not to use trailing stops is the type of system you are trading:

A Fibonacci strategy will use Fib levels as a take profit level.

A break out strategy, however, could be very well suitable for a trail stop.

Then again, for a range strategy the take profit level could be better suited.

A reversal trade might want to incorporate a trail stop after a certain profit has been reached, whereas a trending trade setup could seriously benefit from a trail stop loss as the price extends in one direction.