The fast paced nature of intraday Forex trading lends itself to simple strategies that don’t go overboard on indicators. When traded on the right markets at the right times, a simple price-based breakout strategy can return very impressive profits. Earlier this week, Forex Factory user PIP Combine published a simple breakout strategy that follows that line of thinking.

In his Forex experience, PIP Combine has noticed that the 6 am (London) / 1 am (New York) candle tends to play a significant role in terms of intraday support and resistance. From that observation, he believes that a breakout above the high or below the low of that candle has a strong probability of resulting in a profitable trade. While this strategy is a long way from tradable as it is now, it could provide us with an interesting case study as PIP Combine develops it over time. 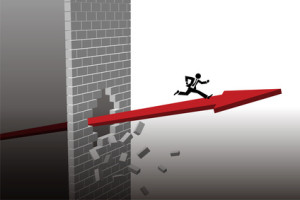 In his post, he explains that he has been watching this phenomenon for the past year while entertaining different options to develop a strategy around it. He has observed that there are three possible outcomes once a market breaks above or below the 6 am (London) candle.

The first outcome is that the price continues in the direction of the breakout. PIP Combine suggests that when these breakouts hold, a trader can generally capture a good percentage of the market’s average true range (ATR).

The second possibility is that the price reverses and retests the breakout, but holds the breakout and continues higher. This creates a slightly more complicated trade as the timing of the trade becomes a factor.

The third possibility is for the price to reverse back into the range of the significant candle, perhaps even breaking out in the opposite direction. This would obviously indicate a losing trade.

The Frankfort Breakout Strategy is designed to trade one-hour charts on the following instruments: GU, GJ, GA, GCHF, GCAD, GN, EU, EJ, EG, AU, NU, UCHF, UJ. Trade entries are signalled by a breakout of at least 5 pips above the high or below the low of the 6 am (London) candle.

The strategy trades a position size of 0.25% its account. Initial stops are set at either 50 pips or a 5 pip breakout of the significant candle in the opposite direction, whichever is smaller. The profit target is 50% of the instrument’s 30-day ATR.

PIP Combine also suggests that there are already a number of possible improvements that could be made. He lists a number of variables that could be optimized, including the stop-loss and take-profit values, position sizing, days to limit the trade to, and the number of confirmation pips above or below the range of the 6 am (London) candle.

Another area for further development will be determining what to do about trades that fall into the second possible outcome. PIP Combine says that his goal is to close out the trade before the US market opens, but he will have to determine how to handle trades that are not clear winners or losers at that point.