Intrabar entries might seem better on the chart, but closed candle entries are superior

Traders must pick between two options when selecting the timing of their entry signal. You can enter based on closed candles, which is the norm amongst experienced developers. Novices typically attempt to enter intrabar, which means to enter the market immediately when a condition changes to true. They mistakenly believe that entering early means earning more pips. 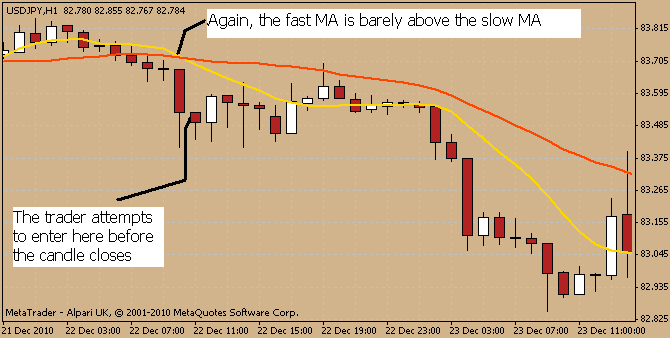 Once the candle closes and confirms the MA cross as a certain fact, an EA places a trade on the third candle. The trade appears late because the entry occurs on a candle not found in the setup. In reality, the difference is only a single tick between the close of the last bar and the open of the next bar. The difference is minimal in terms of time. 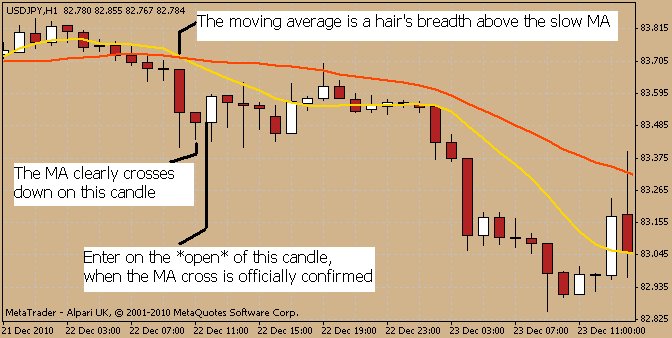 The intrabar method reduces the waiting time from 3 bars to about 1.5 bars. Traders look at the graphic and think that they could have earned more pips. Sometimes, as in the example above, it works out. The EA enters early and rides the trend for a few hundred pips.

Of course not. Otherwise, you would know the future and not have to bother with building EAs. Not knowing where the MA will close also means that you don’t know whether the MA will remain crossed or not. The consequence or entering early means that sometimes you take "signals" that are not signals at all. You look at a chart later and say, "Hey, the MA never crossed! Why did it trade?" The MA did cross. It's just the little problem that you did not plan for it to uncross.

The neophyte then attempts to make things more complicated in the hope of engineering a solution. He says that the EA should not accept all intrabar crosses. Instead, it should only look for good crosses. If it crosses by a certain number of pips, crosses at a certain angle or any solution in that same vein, the underlying problem still exists: you don't know the future.

You don't know whether that good cross will uncross. No matter how strict your condition, eventually, a cross and uncross will happen. You can engineer a cross condition so strict that uncrosses rarely happen. But at that point, did you really gain anything by not waiting for the candle to close?