Through this column we have covered many oscillators which are generally very effective in analyzing momentum; they include the Average True Range, MACD and the VIDYA. Some oscillators are better at predicting short term momentum, while some are lagging indicators and tend to shine brighter when it comes to long term momentum. まだ, in this article, I will be focusing on one oscillator—the Aroon Indicator—that has a very different benefit. As a backstory, the Aroon Indicator was developed by Dr. Tushar Chande a little more than 20 years ago. What makes the Aroon indicator special is that it provides in-depth insight as to how the buyers and the sellers are behaving within each price level. I will explain how that understanding of the buyers’ and the sellers’ behavior is very useful information.

The Aroon indicator, as seen in the chart below, has two separate curves, in this case marked with green and red. The green curve, called the Aroon Up, measures the buying momentum over time and the red curve, called the Aroon Down, measures the selling momentum. How does the Aroon measure momentum? In the Aroon Up it measures how much time it takes a pair to reach the highest level from the opening price at a given period. 逆に, in the Aroon Down, it measures how much time it takes the pair to reach a new low from the opening price. 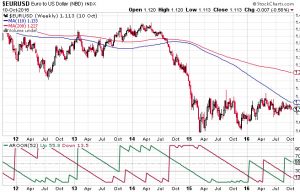 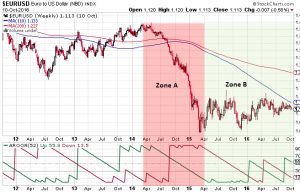 In Zone B, we can see something interesting; while the Aroon Down fell until October 16第 5 回, the Aroon Up was still staying low. だから, while the sellers were out of the market, the buyers were not coming in, suggesting very weak buying appetite. さらに, after October 16第 5 回, the Aroon Up jumped and so did the Aroon Down; later, both fell and then both jumped again. That suggests that even after the nose dive the pair took, and even after some buyers came back, the buyers were hesitant to buy. それにもかかわらず, because the Aroon Down is also unstable it means that, at that level, the sellers were also somewhat hesitant.

もちろんです, I always like to stress that no single indicator is perfect and the Aroon Indicator is no different in that respect. If the Aroon Indicator is not calibrated to the right duration or at other times during very high volatility the reliability of it might be lower. しかし, this is a very powerful Indicator, and the fact that it adds another layer to our analysis by letting us understand the behavior of both the buyers and the seller around each time frame and price zone makes it a powerful tool for those traders that focus on the long term.