先週です, I wrote a post discussing how altering the timeframe of a system can change its results. That got me thinking about other ways that backtesting results could be skewed in one way or another based on user defined data such as the date range and market used. These simple differences can have a tremendous influence on the overall returns of any system, so it is important to pay them their proper respect.

When running backtests, it can be very easy to gloss over the down periods and cherry-pick the big return years. The problem is that you won’t have that opportunity when actually trading a system live. You will need to prepare yourself for the possibility that you select the wrong time or the wrong market to trade a given system. それ以外の場合, you run the risk of letting these backtesting biases adjust your expected return to values the system cannot possibly deliver. 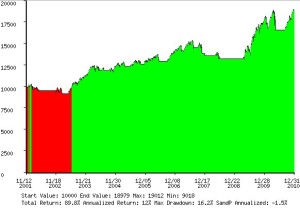 If we would have started trading this system on January 1, 2003, we would have registered a total return of 39% in the three years of trading until the end of 2005. This would have been good for a 16.4% annualized return with a maximum drawdown of only 6%. あなたが見ることができます。, if we based our strategy on these results, we would be expecting the system to continue to produce these extremely high returns.

It is also worth noting that while the ten year track record of this system from 2001 を通じて 2010 is very respectable, we wouldn’t have known that when we started in 2001. If we actually started trading this system in 2001, we would show a total return of -6.2% at the end of 2002. After two full years trading this system, we would not have had a single thing to show for it. The system didn’t find its first big winner until April 15, 2003.

あなたが見ることができます。, the time you chose to begin trading the 10/100 Moving Average Crossover System could have made all the difference over the course of what was a net-profitable decade. It is very important to keep this in mind when you are struggling through drawdowns.

The XLY, which represents consumer discretionary stocks, also would have underperformed the VTI. Trading the system on the XLY would have returned a total of 39.4, または 6.4% 毎年, 最大ドローダウンと 21.3%. 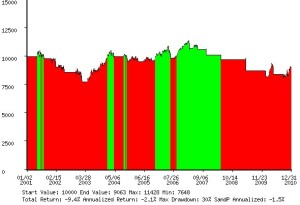 If we would have been fortunate enough to trade the XLK, which represents the technology sector, we would have seen a tremendous total return of 95.7%. This works out to be an annual return of 14.2% 最大ドローダウンと 22.3%.

もう 1 回お願いします, we see that decisions like what markets to trade and when to start can have a tremendous influence on our results. This is why it is so important to thoroughly backtest any strategy across many different combinations of date ranges and markets.