Generic trailing stops maintain a steady pip distance between the most favorable price seen and the stop loss. One thing that I don’t like about this is that trailing stops ignore the take profit. My goal was to increase the information available by using a trailing stop in the context of a take profit.

As the price moves closer to the take profit, the stop loss should maintain the same ratio over the remaining distance. The original take profit was 50 ピップ. Say that the price increased 20. Only 30 pips remain to hit the profit target. The probability trailing stop adjusts the stop loss to 30 pips from the current price if the ratio is 1. If the ratio was 2, then the stop would adjust to 30 * 2 = 60 ピップ. The idea was that perhaps the stop loss should ratchet closer to the take profit as it becomes increasingly likely to occur.

私 バックテスト the idea using a variety of forex pairs and DOW 30 stocks for the first quarter of 2009. The direction of a trade, 長いか短いかどうか, was chosen using a random number. The date chosen was simply because I have M1 data for multiple instruments. The broad spectrum of results would reflect the same trend regardless of the time periods used.

All backtests were on M1 charts. The unit sizes of the trades don’t matter much; I set the trade size to a standard lot on forex pairs and 1,000 shares for equities trades. All used a 50 tick take profit with an equidistant stop loss (the stop loss ratio was 1.0). The profit factors help keep the information consistent among the different instruments.

All of these backtests involve a minimum of 300 取引. The EURUSD バックテスト included more than 1,700 取引. The sample size for all tests are more than sufficient for drawing a conclusion. Using a probability stop with a ratio of 1.0 is a bad idea. 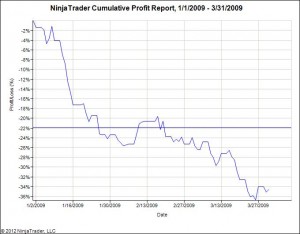 The equity curve for a probability trailing stop on Exxon (XOM) for Q1 2009.

、 エントリ効率 of the system appears solid. しかし, that is because the worst possible exit always shifts up. The idea trades 効率を終了します。 for a hint of エントリ効率. Knowing that the trades pick their direction using random numbers, it is not worthwhile to get excited about this seemingly non-random metric. 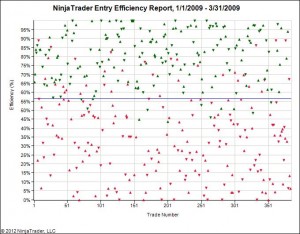 The losses have to come from somewhere. 明らかに, as the image below demonstrates, it results from the terrible 効率を終了します。. Results typically ranged from 35-40%. 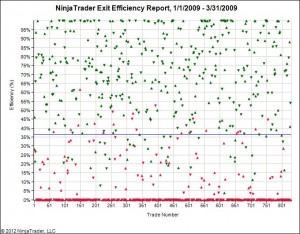 The exit efficiency for a probability trailing stop ranges from 35-40%. The above image is taken from trading McDonalds (MCD).

If you would like to test the concept for yourself, あなたがダウンロードすることができます NinjaTrader export file by clicking 確率トレーリングストップ. You need to email me for the random number file, which needs to be placed in the “C:\” directory. The code will not function without it.

Although the tests for a stop ratio of 1.0 look terrible, all is not lost. I can flip this on its head and turn it into a profitable concept by blending it with the random trailing limit. Outcomes using a ratio of 3.0 also offer potential hope. We’ll cover those outcomes in future blog posts.