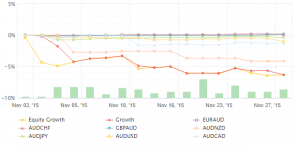 The QB Pro strategy, like any strategy, makes its most important trading decisions when it selects its portfolio. The strategy is not one that can make money in any given environment. 代わりに, it requires careful selection of instruments in order to give itself the best possible opportunity to earn a profit.

Based on about 100 hours of research with Jingwei back in September, I’ve been able to reduce the amount of discretion when selecting portfolio instruments. たとえば, the mega-monster performance from August 2014-March 2015 was driven exclusively by the strength of the US dollar.

As anyone who buys gasoline for their car knows, the trend shifted this year out of currencies and into commodities. 具体的には, commodities have taken a real beating. China’s economy is sputtering, the US like it’s unable to raise interest rates and most industries suffer from serious gluts. Oil production in the US is widely rumored to possess a severe over-capacity, as evidenced by all the junk-debt ratings on US drillers. Gold mining stocks around the world have been the red-headed stepchild of financial markets, trading at PE ratios as low as 1.0.

That weakness spread to commodity currencies, even major currencies like AUD, CADとNZD. As I ran backtests using a portfolios of those currencies and their crosses, I noticed that the equity curve more less marched straight up through the summer. もっと重要なこと, that basket of pairs benefited from the Chinese devaluation, whereas my custom basket took a step drawdown.

I’m expecting more problems of out both China and the US through the rest of the year. Although China managed to settle down after the summer, the problems plaguing it are anything but fixed. Recent bankruptcies and bailout of state owned firms point to more cockroaches. と, you know the rule about cockroaches. Where there’s one, there’s 10 詳細. I expect more Chinese devaluation to follow.

The Fed meeting in October forced the governors to pretend as though a 2015 rate hike is on the table. There’s always the chance that the Fed might hike rates just to prove a point. They’ve been talking about this for 9 ここ数ヶ月. The futures market at one point put the odds somewhere near 67% for a 2015 rate hike. Prior to the meeting, those expectations fell under 25%, then jumped back to around 50%.

Even if the Fed did raise rates, I see an impossibly low probability of a sustained program of rate hikes. The data looks like a car sputtering on fumes. There’s deflation everywhere expect for the financial markets and beef, どこ “investors” have been encouraged to park their money in junk debt in exchange for a pitiful 4-5% yield. The economy is sick. The idea of consumers breaking out their wallets and spending like the drunken sailors of 2007 is laughable.

I’m hosting a webinar on November 12 to teach you as much as I can about algorithmic trading. The webinar is going to cover in detail the QB Pro strategy, especially the SBスコア. I’m also planning to discuss the Fed and Chinese situation in more detail, as these are the two most important factors for us to consider when applying strategies. Make sure to sign up to the newsletter to be notified when I start accepting registrations. This is also open to traders in the United States, which is a big change from previous options!