Many ideas for expert advisors and strategies utilize the concept of divergence for making trading decisions. Although the idea appears in countless indicators, divergence is most often drawn on CCI, MACD and the stochastics indicators.

Divergence occurs whenever the price and some oscillating indicator diverge in their directionality. Price can theoretically be any value between 0 and infinity. It does not have a ceiling.

Oscillators, 一方、, are bounded by minimum and maximum values. Stochastics and the RSI range between zero and one hundred. The number fifty represents an equilibrium in the movement of prices.

The problem with divergence is that if you put 10 different traders in a room and ask them to draw all of the divergences that they see, you’ll get 10 別の回答. Traders each have personalities, all of which vary in their sensitivity to price movements. Some look at broad trends, while others obsess over the tiniest flutter in the market. Those groups in turn draw divergences either in line with major price movements or mark the chart with constant buzzing up and down. All of this is a complicated way of saying that the period used for divergence is arbitrary.

Every thing written about divergence promises that it shows when to consider exiting a trade. My opinion is that this is probably not sound. If you think about the major legs of a trend, you can think of it like the probability of a coin toss. When the first leg of a trend starts, it has something like a 50% probability of ending. Just as with the coin toss, the fact that a coin comes up heads doesn’t change the probability of the next toss coming up heads.

If you trade the second leg of a trend, then you eliminate half of the losers that would have occurred. More persuasively, I don’t think that you can spot a trend before it occurs from any type of technical analysis. Trading the first leg is not an option if you assume that trend directionality cannot be predicted before the trend even starts.

I’m tempted to turn the idea on its head. If you define divergence with an unvarying period that is programmable, then it would be possible to analyze the probability of a trend continuing. I don’t see much validity in Elliot Wave Theory, but I do like the idea of the third leg being the biggest. Most people would count the third leg of an Elliot Wave trend as the second leg. It represents the second move in the direction of the trend.

If you used divergence as an entry method after the first leg finishes and placed a stop at the beginning of the trend, then you would expect to find a profitable strategy based on the assumptions about leg length. If the first leg is usually shorter and the second leg is usually bigger, then the winners should be bigger than the losers. 、 50-50 odds of winning would still yield a slightly positive profit factor. Anything greater than 50% odds would make for a stellar 専門家アドバイザー.

What I like about divergence is its relationship to oscillating indicators. The oscillators attempt to rescale the price, which happens to match nicely with a mathematical concept called the ハースト指数. The Hurst exponent is a number between 0 と 1 that measures the trendiness of a signal. 値 0 implies a value that never moves, whereas a value of 1 implies a value that trends in a straight line. Financial data on sufficient time scales, usually one hour bars or longer, exhibit high Hurst values. Testing that I did on the EUR/USD daily data showed a Hurst exponent around 0.7.

The method for estimating the Hurst exponent involves rescaling the price across different lengths of time. The fact that oscillators attempt to rescale price jumped out at me. 真, they do it in a much more simplistic manner. The fact that divergence, a phenomenon that occurs from rescaling, occurs when compared to the original price encourages me. It makes me wonder if there might be a kernel of mathematical truth in an otherwise subjective concept. 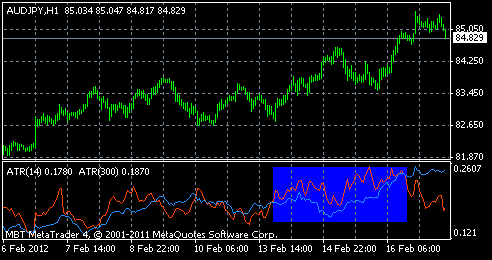