I came across a paper entitled A Quantitative Approach to Tactical Asset Allocation by Mebane Faber. This paper appears to have been extremely popular over the years. Reading through the contents and reviewing the charts, I loudly wondered if the strategy might apply to gold.

The idea is very simple. Taken directly from the paper, the rules are:

1. All entry and exit prices are on the day of the signal at the close. The model is only
updated once a month on the last day of the month. Price fluctuations during the rest of
the month are ignored.
2. All data series are total return series including dividends, updated monthly.
3. Cash returns are estimated with 90-day Treasury bills, and margin rates (for leveraged
models to be discussed later) are estimated with the broker call rate.
4. Taxes, 手数料, and slippage are excluded.

One thing which drives me crazy about NinjaTrader is that the percent return calculations are so opaque. The actual numbers used a clearly wrong. The buy and hold return for gold is easy to calculate. 、 1997 price was about $350 an ounce. 今日, gold trades near $1,700. The buy and hold return should be in the neighborhood of 385%. NinjaTrader claims that the return is somewhere near 150%. I’ve gone through the charts to confirm that the trades are correct. You can download the gold strategy for NinjaTrader and verify the trades for yourself.

The percent return metric is consistent within the platform, so luckily the exact numbers are unimportant. The only thing that really matters is whether or not the strategy returns a bigger number than the buy and hold approach.

The strategy severely underperforms the buy and hold return. The idea held in the paper itself is deeply flawed. Buy and hold is a silly concept. Most of the “返します” in the portfolio stem from long term inflation and the devaluing of the dollar. The prices of the securities rose because the dollar, which you can think of as the counter currency, declined enormously in value over this time period.

さらに, the idea of the price crossing the moving average implies that the trend escapes the moving average. The MA, 実際には, gets dragged along with the price. While this is true with a handful of monster trends, the way that price moves usually work is something along the lines of 10 steps forward, 9 steps backward. The results of the test indicate this.

The major automated trading platforms such as MetaTrader 4, NinjaTrader and TradeStation all count time in the same way. This makes it quite convenient for ordering trading strategies and expert advisors; you don’t have to do any mental gymnastics to describe the strategy in different platforms. The consistent arrangement of time makes it easy for us to translate trading strategies across multiple platforms.

All of these charting platforms are written by speakers of left to right languages. The past is anything that’s not on the far right side. The present is the square on the far right. Each square represents an equal time interval. Traders know these as bars.

A visual display of time and how it's segmented

What tends to confuse everyone ordering expert advisors is that even though time marches to the right, trading programmers count the bars to the left. What makes things more confusing is that programmers always start counting from 0 代わりに 1.

Even though time moves to the right, we count it from the right and move back left

If you want to trade a moving average cross strategy that waits for the bars to close, what you’re looking at is “bar 2” と “bar 1”. The way I describe this in the 仕事の範囲 is the value at two closed bars ago and the value at the last closed bar, それぞれ.

An expert advisor that uses closed bars ignores bar 0 because it is still open, which causes the moving average values to fluctuate. The only way to know for certain a moving average value at a particular bar is to wait for the bar to close, which means it is no longer bar 0. When a client requests an expert advisor that trades intrabar, they intend to compare the moving averages at “bar 1” と “bar 0”. In plain language, that means to compare the value at the last closed bar with the currently open bar.

うまくいけば、, this description makes sense when you open a chart and see the bars already loaded. The final confusing element is when a new bar pops onto the screen. The previous examples showed 5 bars on the chart (バー 0-4). When a sixth bar pops up, the count is reset to the new time period on every update.

Say that we’re looking at an H1 chart in MetaTrader and that the current time is 06:00. When the new hour strikes, the chart loads a new candle to represent 07:00. It’s at this time that the count resets. 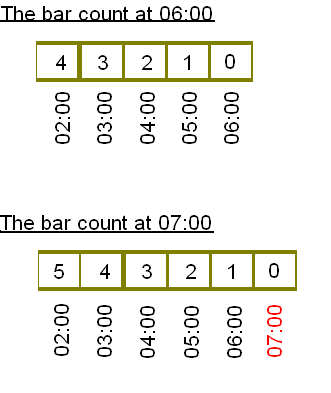 When a new bar appears, your charting platform resets the count based on the newest bar.