このことを念頭に置いて考えに, let’s look at a very simple system that uses just one indicator, the MACD.

You know where this strategy makes money – in trends. Apply the high level filter yourself when trading. Is this market trending? はいの場合, apply the strategy. そうでない場合, then don’t. They are simple rules for a complex world. 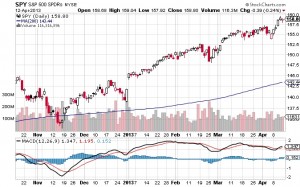 If we use the chart of the SPY above as an example, the system would have given a buy signal in late November, right after the SPY broke above the 200 日単純移動平均. The system would have logged some nice profits before generating a sell signal as the market pulled back at the end of the year.

Demonstrating that this system works during a four month stretch of a strongly trending market does not mean this is a proven strategy. You know from the strategy basics that it only works in trends. しかし, if you are looking to build a trading system, this makes for a simple and convenient starting point.

あなたが見ることができます。, the MACD (Moving Average Convergence/Divergence) indicator draws below a normal chart and contains a histogram and two lines.

The black line, which is the slightly thicker line on most charts, is called the MACD Line. The default MACD Line represents the different between the 12 と 26 day Exponential Moving Averages. These are the first two variables that the trader can adjust. I recommend using the default EMAs to keep this system simple.