I always like to say, that in any trading strategy, you should only be exposed to the market when absolutely necessary. それです, whether it’s a strategy running on daily intervals or on monthly intervals, a trader should not stay in the market longer than needed because it leaves room for the unexpected. This is especially true when it comes to momentum strategies and it can be the difference between gain and pain. The Symmetrical Triangle strategy is one that is simple and effective enough to let you gain from momentum, without staying a second longer than necessary. The strategy relies on a pattern that, no surprise, is called the Symmetrical Triangle.

So what is the symmetrical triangle pattern? 簡単に言えば, it is a pattern that enables you to buy into a correction and sell before the pair peaks again. 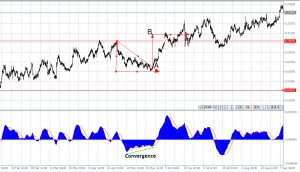 The buy signal comes at a very specific time. That is after the pair breaks the correction pattern and oscillator (in this case, the MACD) moves back above zero and ascends into buy territory.

The chart shows that the pair has continued above point B (which was our target), yet the symmetry rule made us exit the trade early. なぜ? The idea is that when you have a triangle break that fulfilled the aforementioned conditions it tends to generate a move higher, at least the same height as the triangle from the point of the break. 場合, たとえば, the bullish trend would have been over, the pair would have topped out a little above point B. But if we were targeting G, a higher point, and stayed too long, we could have ended up with pain rather than gain. But the symmetry method allows us to take a profit even if the pair was about to top out and reverse.

当然のことながら, that means you cannot rely on this strategy alone for profits because it may take time between each opportunity. しかし, when balanced with other strategies, the Symmetrical Triangle can certainly spice up your results and allow you to improve your trading performance each time it produces a burst of momentum.