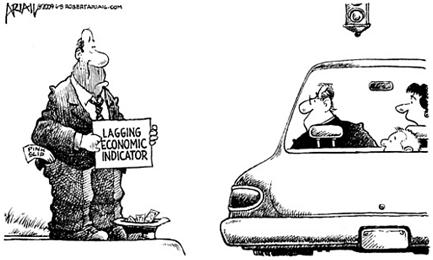 A  question that I get asked quite a bit has to do with “lagging indicators”.  Many traders will deride them and are hesitant to use them since they lag the market to a greater or lesser degree.  Their argument is that many pips can be left behind since the initial part of the move has occurred before the entry signal is generated.

While that is an accurate statement, let’s take a look at what comprises the signal that an indicator generates.  Regardless of which indicator a trader uses, RSI, MACD, Stochastics, CCI, etc., each indicator is based on an average of the price action that has already taken place.  With that being the case, it is impossible for an indicator to provide split second, turn on a dime signals based on an immediate move that a currency pair has made.

And, believe it or not, I believe that is a very good thing.

While no one likes to leave “pips on the table” so to speak, think of it this way…

What you are forgoing by missing the initial move, you make up for by entering a trade that has a greater amount of confirmation behind it.  If we are looking to enter a trade at the very first sign that a move may be taking place, we are going to find ourselves entering trades based on very short term signals – i.e., little or no confirmation.  Consequently, we will be basing our trades on what ultimately can turn out to be a “false entry” signal.

People will rarely (if ever) buy a house based solely on what it looks like from the curb…or buy a car only because the driver’s seat feels comfortable…or propose marriage to someone during a first date.  We want and deserve some confirmation that there is more to the house than only curb appeal…more to the car than just a comfy seat…and more to our partner than what we learned over a few hours.

So too, we should not jump headlong into a trade based on virtually zero confirmation. 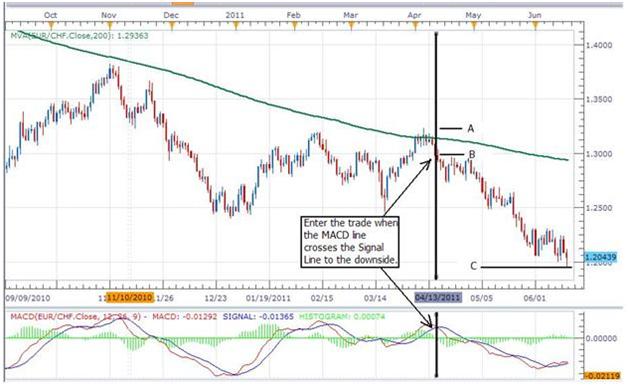 If we enter this trade at the point where the MACD line (red) crosses the Signal line (blue), we forgo the profit between point A and point B on the chart – approximately 280 pips.  This is due to the “lag” of the MACD indicator as it is calculating the price action that has taken place over the last several days.  Had we entered the trade short as soon as price began to move down from the high, we would have entered on a bearish move but with virtually no confirmation – we would have bought the house without stepping inside.

However, if we wait for the signal to enter this trade until the move is confirmed by MACD, we set ourselves up for a higher probability trade based on our lagging indicator.

Could this trade turned out to be a loser even with the confirming signal?  Sure…no doubt about it.  But the point is that by waiting we are putting probabilities more on our side – we have more of an “edge” on the trade.

In the case of this particular trade, we ultimately book the profit between point B and point C which is just shy of 1000 pips.

As can be seen from this example, it is possible to have a highly successful trade even though a trader is not capturing the initial pips in a move.

All things considered, I would rather enter a trade late and be right than enter early and be wrong.