Moving from small time retail forex accounts to a serious account size comes with some bumps in the road. Most traders see the prices of forex pairs on the screen and assume that they can buy and sell unlimited quantities at any time. Although the forex market is the largest market of any in the world, making it the most liquid, there is still a limited size to what you can trade at any moment.

NinjaTrader and MB Trading both make market depth information available in their trading screens. It shows where all of the nearby liquidity lies. Say, for example, that you wanted to place a big order for EUR/USD. You can see in the screenshot from MB Trading’s platform that the currency market depth gets bigger as you get further from the price. They call these “Level 2” quotes, which is jargon taken from equities traders. 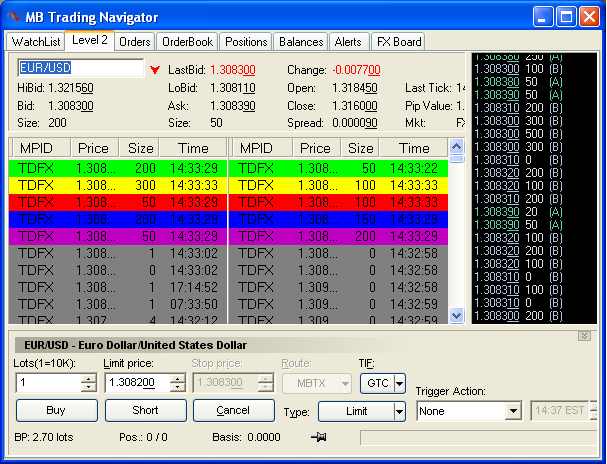 I took this screenshot in the late afternoon when liquidity is at its worst. The best bid shows a depth of 200, which is measured in mini lots of 10,000. You could sell up to 2 million EUR/USD and get filled at that price. Notice, however, that most of the liquidity is further away. 3 million sits at the next best price and another 3 million even further from that. The net available liquidity is 8 million on the short side and 6 million on the long side for a total of 14 million.

The FX Pro screen in NinjaTrader makes it even clearer. I took this screenshot several minutes later, which is why liquidity numbers are different. One thing I really like about this screen is that NinjaTrader converts the currency market depth into more tangible numbers. The formatting makes more sense to me. Plus, it’s much easier to keep track of the varying spread.

The FX Pro screen in NinjaTrader

What you learned in economics doesn’t apply to trading. Dealing in bulk actually leads to worse pricing instead of improved pricing. The reason is that forex instruments are so standardized that there’s effectively never a lack of customers. It’s really an issue of getting how much much you want at a certain speed.

Only a fool would hit the market with 20M EURUSD instantaneously unless you’re desperate to exit a position. If you push a market order judging solely from the quote on the screen, you may get 2-8 million filled at the displayed price. But, the rest of the order will get filled at progressively worse prices. The traders making a market want their pound of flesh for letting someone into the market so quickly.

Traders cannot see the liquidity depth of most brokers because they elect not to show it. Their platforms encourage the buy this, buy that psychology. The more information that they broadcast, the more bandwidth that’s required, which means that better servers are required.

The EURUSD is the most liquid forex pair in the world. This varies largely by broker, but at any given time you should be able to trade 20-30 million EUR/USD. That doesn’t mean that you’ll get filled at the price on the screen. What that means is that that is the sum quantity available at any given moment.

Some brokers hide their quantity. It’s not like the stock market where if there are 15,000 shares of Microsoft ready to trade at any given moment, you can see 100% of the liquidity available. In forex, as an OTC market, the broker may wish to restrict the viewable book for a few reasons.

If you offer markets from say 5 banks, it’s very rare for the broker to feed the best competitive price and to let the banks fight it out? Why? Because the broker also needs the banks to stick around when nobody wants to trade.

It’s an informal agreement that if I’m retail broker A and UBS is my main liquidity feed, I go out of my way to give UBS the good flow. My customers expect to trade during NFP and other volatile markets (although they really shouldn’t!). If the brokerage simply lets the banks fight it out, then the banks have every reason to let the brokerage rot on the vine when their customers want to trade but it’s bad for the banks. The banks certainly don’t want to take positions in volatile markets. Their only incentive for doing so is if the “good flow” that the forex broker sends during normal markets incentivizes them to accept the risk of losing more than they care to during NFP.

News traders are the most likely to try trading during a thin market. They are also the most likely to complain about not being able to trade. These are the arguments to which I’m least sympathetic. If you’re trading the news, you are overwhelmingly likely to have less than one year of trading experience. The decision has nothing to do with researching systems or evaluating whether or not it’s a good idea. It has everything to do with gambling.

Retail traders are the most likely to trade during volatile events, not just news but really any type of momentum. Almost everyone follows a breakout or momentum strategy. It has everything to do with what traders perceive as the most likely outcome. When the market explodes in one direction, it takes nerves of steel to stand in front of the freight train. Therefore, it’s probably a good idea because it’s counter-intuitive.

Trends happen so slowly that they don’t excite the gambling buzz that most retail forex traders are after. My friend Afshin in Dublin fell victim to this last week. He saw the EUR/USD rising day after day after day. He felt like it was simply overdue for a correction. The urge to participate, rather than coming from a desire for a quick hit, instead came from a desire to be right before there was any clear indication of the opportunity to be right. The point is that what feels natural to do is often precisely the wrong thing to do. It feels natural to every other trader, too.

One research project that I’d eventually love to do is to study how market depth on any given side of a market affects direction. Some traders run simple liquidity businesses where they receive trading rebates in exchange for accepting the risk of holding a position over the short run. These entities are less likely to concern themselves with picking the direction of the market.

Trading desks that make markets, however, often want the flow so that they can establish a position and earn the spread while doing so. These entities are picking direction – and they are backed by very intelligent math geeks with PhDs and a lot of time on their hands. If those desks make a visibly deep market and it’s sufficiently one sided, then it’s probably safe to assume that they expect to the market to move in the opposite direction.

When you’re buying a forex pair, the bank is selling it to you. So if everyone stacks the liquidity so that you can buy but the liquidity is thin on the short side, it should be telling you that the smart money wants to go short right now.