Kebanyakan peniaga, when hearing the combination of trading and rate decision, have an immediate reaction. That is to avoid, avoid and one more time, avoid the situation.

It can hit you like a black swan, and there is no technical indicator that can help you with that. Jadi, the best idea would be to disengage, betul? Baik, not exactly. Here are a few tricks that I use that can step up your game on trading interest rates.

The first thing you have to realize with rate decisions (dan, sudah tentu, I mean a Fed rate decision) is that it’s completely a game of chance.

No one really knows what will happen. And no indicator in the world can tell you with complete certainty what will happen. But you can have a good indication of what is expected and the market’s possible reaction. And that, benar-benar, is just enough. But unlike the conventional wisdom, the trick to playing this information is to go against the mainstream.

Jadi, if you went against the market consensus and bet on a rate hike it would have played out in one of two ways. If you were wrong, you’d think, oh well, it was already priced in. It was expected and your loss is minimal because the market was prepared for that decision.

Pada dasarnya, the move already took place, before you opened your trade. But if you were right and the consensus was wrong? There would be a tsunami, sudah tentu, but you would have been on top of it, potentially gaining big. Dalam erti kata lain, you risked little for a potential big gain, a classic risk reward trading bet.

Ya, that’s the one where the Fed did tidak make a move. Seperti yang anda lihat, the FedWatch tool indicated a 25% chance for a rate hike. That also means a 75% probability of no change. Sekarang, as you can see in the chart below, as soon as the Fed announced its decision the Dollar index fell. But it fell by roughly 100 pips, hardly a hefty sell off. 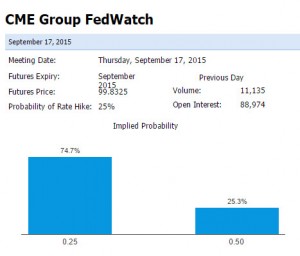 Malah, support levels weren’t even broken at the time this article was written. Meaning? If you had taken the other side of the market consensus (with the 25% peluang), you got it wrong. Akhirnya, you got hit by 100 pips–ultimately, no big deal.

But what if the Fed had made a move? Seperti yang anda lihat, the Dollar index was already close to its support levels. That means that traders were skeptical. 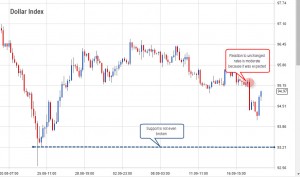 Sudah tentu, there are situations where it’s not worth it to engage. Sebagai contoh, if we move forward to January 16, you can see the market is pricing in a near 50/50 chance that the Fed will make a move. That means the market is not sure.

But what if the chances of a rate hike were higher than 60% and the Dollar was closer to its highs? A decision not to raise rates would have caught the market off guard. For a trader, it might have been wise to take a short position before the decision. Sudah tentu, there are many more layers and nuances that can be added which I will cover at another time. 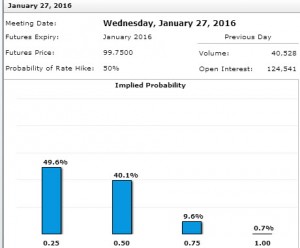 Kesimpulannya, there are no guarantees in life. But if you’ve ever wondered if you can step up your game on trading a rate decision, now you’ve got my two cents.