Can a trading strategy be doing too well? That sounds counter-intuitive, certainly. Like suggesting that someone can be too rich or too successful. You might be thinking there’s no such thing. But when it comes to managing your trading strategy, one that is performing too well is a warning sign. That’s because, agak kerap, an over-achieving trading strategy can turn into a honey trap.

In this article we will focus on a couple of cases studies where a “too good” strategy is something to watch out for. Mudah-mudahan, that’s a lesson one can learn from now rather than, painfully, at some later date.

A Trading Strategy with a High Win Ratio

The first case study is one of a strategy of mid- to short-term timeframes. In this case study, the frequency of executed trades is higher than 100 a month.

Biasanya, a solid strategy has an average memenangi nisbah daripada 45% kepada 60%. That ratio might sometimes be lower if the risk reward ratio is very strong. But higher than that is almost always is unsuitable.

In the strategy below we can see that the average win ratio per month runs from as low as 44 to as high as 64. Sometimes it is on the rise in the higher range and sometimes in the lower range. Regardless which, eventually it will all revolve around the average.

Sebagai contoh, in the month of January 2014, the win ratio was 52%. That means that for every 100 trades executed, 52 menguntungkan.

But in the second part(merah), we can see things start to go a bit too well. The win ratio jumped to above 80% and stayed above that level for 3 bulan. Secara semula jadi, di 80%, that was far beyond the norm. What would come next was inevitable. 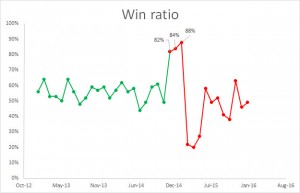 The second reason it is risky is more psychological but still very common. That is that many traders fail to realize that an overly high win ratio is very temporary in nature. Having failed to see that, what do they do? They raise their leverage. And when the sweet turns to bitter and they have only a 20% win ratio for 3 bulan, then what? All they’re left with is an empty account.

What should you do? This is rather simple; you reduce the risk you take per trade by lowering your leverage. It’s true you will gain less but you will also avoid the pitfall that comes after. Sudah tentu, if your leverage is already low and your account can sustain a prolonged period of a low win ratio than let statistics reign. But be prepared, psychologically, for choppy times.

Trading Strategy Profits that are Too Much Too Fast

The second case study is common in trading strategies that are low in frequency. The durations may range from a few days to even a few months. Let’s say you enter into a buy trade after your trading strategy indicated a bullish trend. You set the limit at 1,290. Rata-rata, you expect the limit to be reached within 3 kepada 4 hari. But suddenly the trade advances in a fraction of the time and reaches relatively close to your trade.

Because many times traders insist on waiting for their limit to be hit so they leave the trade open. But then the pair moves into overbought territory and before you know it the trend has reversed. You either close the position with a much smaller gain or, even worse, you lose the trade. Because you trade at a low frequency, this one outcome can be quite painful. You lost precious time when your position was open and missed the potential profit that you could have made.

What should you do? The solution here is rather simple, serta. You could use a trailing stop loss which is the most obvious tool to avert such cases.

Sebagai alternatif, you could use oscillators to identify a potentially hazardous situation. Add a component to your trading strategy to alert you if your pair reaches an overbought (or oversold) tahap. Make it a practice to exit the trade even if the target was not reached. 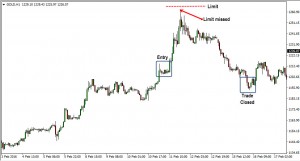