I try compile strategies all the time in NinjaTrader. Whenever errors pop up, they are usually directly related to the file that I’m working on. Occasionally, I get the dreaded orange errors referencing files that have nothing to do with what I’m working on. Life quickly turns to misery if 20+ indicators all use the problematic file.

If you’ve ever wondered why it takes NinjaTrader so long to compile a simple indicator, it’s because it compiles all indicators and strategies every single time you push the compile button. Instead of compiling one files, it does something more like 100 files.

A quick way to avoid this nightmare situation is to get rid of the file in question and deal with it later. Especially when I’m under deadline, the last thing I want to do is to spend several hours hunting bugs in unrelated files. The steps involved are very simple. 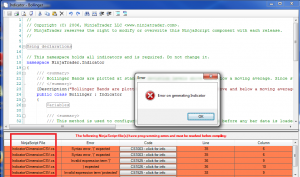 The orange highlights indicate that a compile error occurred in another NinjaTrader file. Hints to the problem files name are found in the far left column of the orange box.