April and May were a real swift kick in the teeth. There’s no hiding around the fact that the market wasn’t very nice to me or my trading accounts.

The high risk account took a 6.2% loss. That would be very troublesome on a normal leverage account, but it’s a drop in the bucket by high risk standards. I look at it as more or less breaking even.

As a sign of my increased confidence, I increased my total deposits to $7,500 across the two accounts. As of today, the high risk account is back to trading on 20:1 leverage. It was at 5:1 for the past few weeks. 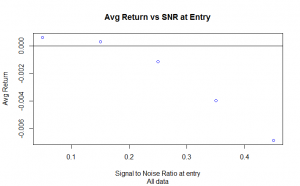 Conclusion: only take trades if the SNR is in the good area. That’s exactly what the updated strategy is doing as of last Friday.

QB Pro historically wins in 2 out of every 3 months. I don’t have enough data to judge whether consecutive losing months are dependent or independent, but it’s only happened twice historically where the system lost 3 months in a row. It’s never lost more than 3 consecutive months going all the way back to 2008.