I got the idea for a trailing limit from Van Tharpe’s market classic Trade Your Way to Financial Freedom.  I made Jon Rackley read through the book as part of his training when I first hired him. He brought my attention to an unusual claim made on page 267. Van Tharpe says that it’s often possible to make money even with random numbers.

Random numbers are a pet theory of mine. I’ve long put effort into figuring out whether I could develop a strategy that trades totally at random and still makes money. As the owner of a programming company for traders, and as part of Jon’s initial training for NinjaTrader in December, I assigned him the task of programming the strategy into code.

The book states that trading with totally random entries and a 3 ATR trailing stop generally leads to making money. Flip a coin. You go long if it lands on heads.  Go short if it lands on tails. One important note is that we elected to use pure random numbers in our programming instead of the pseudo-random numbers that computers generate. Doing so allows us to avoid time biases in the seeding process that generally pop up when the seeds used are close together in time.

The first working version that I reviewed displayed everything contrary to Van Tharpe’s claims. Using a trailing stop, regardless of the instrument and time frame tested, inevitably led to devastating losses. The profit factors consistently came in near 0.7, a truly awful number.

We did what most of our clients do when they find abysmal strategies. We flipped the strategy on its head. The new strategy uses only a 3 ATR (50 period) trailing limit.

The early conclusion is that trailing limits seem to offer a great deal of potential. Although Jon sent me the code several months ago, it’s only this evening that I had a chance to properly review and test everything.

The profit factors are very encouraging. It depends on the chart that I tested. The worst that I found was a 1.0 profit factor. Everything else came out with profit factors greater than 1. The small table below contains the initial test results. Before you go off salivating that this is the next hot winner, there are a few considerations to keep in mind: 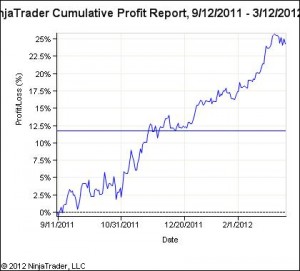 What made me feel better about the results was reviewing the entry and exit efficiencies of each strategy. The number of trades involved really cluttered the graphic. I ran a backtest on a much shorter time period so that the horizontal, blue line would appear clearly on each graph.

The entry efficiency tells us exactly what we would expect to find. Trades which enter at random do not perform better than random (obviously). What’s interesting is how the trailing limit exit strategy actually skews the entry efficiencies to read slightly worse than random. This is a good example of why it’s dangerous to rely purely on statistics. Keeping the big picture in mind reduces the likelihood of making an erroneous conclusion, in this case that there might be something “wrong” with our perfectly random entries.

The exit strategy, which is what we’re truly testing, looks absolutely stellar. It shows that acting as a conditional probability allows for a great deal of adverse movement while capturing extreme points of the move.

The percentage of winners for the tested charts ranges from 60-67% accuracy. High percentages of winners often lead to winning streaks. My cursory glance through the chart led to my easily finding a suitable example to cherry pick. Here, 5 trades in a row reach their near maximum take profits. 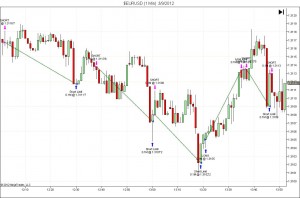 Testing that I’ve done in the past tells me that it’s often advantageous to increase the position size based on consecutive winners when a strategy is more than 50% accurate.  My first idea after reviewing the initial results was to modify the forex money management strategy to pursue the consecutive winners. We unfortunately do not have time to pursue those changes in the code right now. Let me know if you’re interested in seeing this and we’ll make it a priority if enough readers respond.

While increasing the risk after consecutive winners works out statistically in your favor, it does add to the risk. It’s entirely possible for a “winning” set of trades to start losing based solely on the money management strategy.  There’s no way to know whether your set of trades will be the luck beneficiary of the extra risk or whether it will be the unlikely loser.

Everyone talks about stops. You always have to have a stop. Blah blah blah. I know it’s going to be the first question that everyone asks.

My research shows that trading with a stop is for suckers. Larry Connors’ book Short Term Trading Strategies That Work was the first trading book where I actually felt like I read valuable information. One of my favorite sections is on stop losses. His research shows that using a stop loss (even a 50% stop loss) always reduces the performance of a strategy. My own independent analysis bears this out.

Not using stops does not mean never taking losses. On the contrary, refusing to exit the market at a loss makes for a 100% odds of blowing up one day. The point of using a stop or limit is to empirically define, and to never waver from, a specific point or points in the market at which you will exit. A trailing limit accomplishes that goal admirably.

Interestingly, the trailing limit is one feature which FAP Turbo incorporates that I have yet to find in any other expert advisors. Although I’m not a fan of FAP Turbo type of strategies, it certainly does interest me that one of its main features aligns with this research. Also notable is the fact that the trailing limit continues down even to the point where it accepts losses.