The 10/6 Relative Strength Mean Reversion System works very similarly to the RSI 25/75 Mean Reversion System. It uses the RSI indicator to determine when an uptrend becomes oversold or when a downtrend becomes overbought. The goal of this system is to identify situations where trading has gotten too far away from the long term trend and then make a quick profit by anticipating that the price will snap back to the long term mean.

The 10/6 Relative Strength Mean Reversion System is the final system published in High Probability ETF Trading by Larry Connors and Cesar Alvarez. It is designed to look for more extreme overbought/oversold situations than its relative, the RSI 25/75 Mean Reversion System. If their theory is correct, this should result in less frequent, but quicker trades. It should also provide a higher win rate and profit ratio.

Like most of the systems published by Connors and Alvarez, the 10/6 Relative Strength System uses the 200 day simple moving average (SMA) to identify the long term trend in a given market. It then uses the RSI indicator to identify entry points and the 5 day SMA to identify exit points.

If a market is in a long term uptrend, the system establishes a long position anytime that the RSI drops below 10. It doubles that position if the RSI continues lower and drops below 6. It then exits that long position when the price closes above the 5 day SMA.

Connors and Alvarez tested this system across a basket of 20 different ETFs from their inception through the end of 2008. The ETFs chosen were meant to represent of broad cross section of markets.

The system made a total of 1,075 trades on the long side. Of those trade, 81% were profitable and the average profit per trade was 0.93%. The average trade was held for 3.7 days. The ETF with the highest win rate was the ILF, which was profitable on 88.7% of its trades and returned almost 2% per trade. 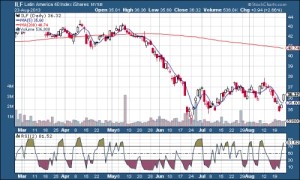 The ILF was the highest returning ETF used in the backtest

On the short side, the system made a total of 566 trades that lasted an average of 3.8 days. Of those trades, 76% were winners and the average trade returned a profit of 1.56%. The ILF fared very well on the downside as well, posting a win rate of 80% and an average profit of 5.55%.

The most logical way to analyze this system is to compare it to its close relative, the RSI 25/75 Mean Reversion System. Remember, because the 10/6 Relative Strength System is looking for more extreme overbought/oversold situations, we are expecting it to post less trades, but higher returns on those trades.

Based on these numbers, the 10/6 Relative Strength System does not live up to the hype and actually underperforms the RSI 25/75 System. However, Connors and Alvarez do not provide us with any information regarding risk exposure. Before trading either of these systems, we would want to perform our own backtesting and determine what type of drawdowns we could expect from each system.

My biggest concern with this system is the same concern I have with every system Connors and Alvarez have published. I am not comfortable trading a system that enters into trades without identifying the maximum loss that the trade can take. While I understand that it is theoretically unlikely that an ETF would go to zero, that is exactly the type of Black Swan scenario I want to guard against.

Because the 10/6 Relative Strength and RSI 25/75 Systems are so similar, I am curious as to whether there is a way we could combine them in a way that would preserve their best qualities while limiting their negatives. Perhaps we could improve on the results if we traded one system on the long side and the other system on the short side.

Since the ILF was the most profitable ETF traded over the backtesting period, let’s take a look at its current chart and see what trades this system would have made over the past few months.

After losing its 200 day line in mid-April, the ILF attempted to rally back through the line, but instead bounced off of it. The timing would have been very close, but at the height of that rally attempt, the RSI spiked above 90. This would have initiated a short position. On the very next day, the price bounced off the 200 day line and posted a big loss as it also broke through its 5 day line. This would have closed out a profitable trade for the system.

The downtrend continued through the rest of this year until the ILF attempted to find a bottom in late June. As it attempted a rally, the RSI spiked above 90. Once again, this initiated a short position that was immediately followed by a big down day that crashed through the 5 day line creating another profitable trade.

In both of these current examples, we see the system doing exactly what it was designed to do. It identified an extreme overbought condition and established a position anticipating a quick snap back to the mean.