One of the long-running debate for designers of equities-based quantitative strategies can be boiled down to three words: strength vs. weakness.

The strength side of the argument maintains that stocks that are breaking into new highs are statistically more likely to continue higher. On the flip side, the weakness argument advocates buying stocks at their lows because they are priced at a discount to their actual value.

There are investing and trading icons on both side of this argument going all the way back to guys like Jesse Livermore and Benjamin Graham. There have also been plenty of successful examples of both strategies over the past hundred years. 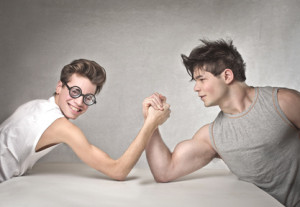 Cesar Alvarez put together a simple rotational system that allows us to compare relative strength to weakness.

In one of his recent posts, Cesar Alvarez decided to look into designing a simple rotational strategy that would use the S&P 500 stocks as its universe and rebalance its positions on a monthly basis. The interesting debate that he faced was whether to focus on holding the best performing stocks or the worst performing stocks.

Of course, the best way to determine the answer to that debate was to actually test both strategies. Here are the rules and parameters as he defined them:

While the numbers indicate that holding the best stocks would have produced a better and less volatile return than holding the worst stocks, both strategies dramatically outperformed a simple buy and hold approach.

Alvarez suggests that he would also repeat the test changing the number of stocks held and trying different lookback periods to rank the stocks. I would be curious to see how adding a stop-loss that allowed the strategy to exit positions mid-month would affect the drawdowns.