Over 96% of retail forex traders are currently long the GBP/JPY. Such a one-sided market is an absolute disaster in the making. It also makes for a brilliant trend trading opportunity.

What does this mean?

Everyone in the industry thinks of retail forex traders as the dumb money. Brokerages rely heavily on marketing and leverage to attract new customers, most of whom have little to no idea of what they’re doing. Reading the open book on this group’s trades offers a unique insight into raw trading emotions.

The CFTC does not often come up with regulations that I like, but one major exception is that they require forex brokers to publish the profitability of their clients. The reports on any given quarter show at least 60% of clients lose money in any given 3 month period. I can tell you from my experience as a broker that almost all accounts are closed within 9 months of opening due to losses. Retail traders deserve the reputation as dependable losers. 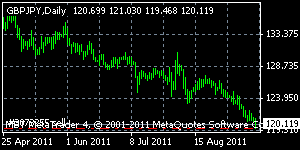 Nearly everyone looks at the current GBP/JPY chart and bets it will go up. When I look at it, I can’t help but think that it’s long overdue for a correction. I certainly wouldn’t bet that it’s going up. The appearance alone makes me leery of a short.

Knowing that the market is so one-sided, however, makes me care less about the chart. Market mechanics are far more important to understand than technical analysis. 96% of the dumb money has chosen its direction. That’s all you need to know.

How a long or short squeeze works

Let’s take our current GBP/JPY example. 96% of traders involved in this trade are long with an average floating loss of 241 pips. Step into the mind of this trader. They don’t expect this trade to turn out profitable. They hope and pray that the market turns around 241 pips so that they don’t have to take a loss.

Some of them are looking at this huge loss and starting to get nervous. Some might be over-margined and forced to sell their losing trade. Regardless of the cause, a falling price starts as a few traders closing longs by selling. The selling pressure pushes the price down further, which causes even more pain for the remaining longs. This type of situation usually results in a strong, downward price trend.

96% of retail traders with a GBP/JPY are long, but only 3% of retail traders actually have a GBP/JPY trade. Retail traders are not heavily involved in the pair. It is possible that they could choose to reallocate portions of their open trades into GBP/JPY. If this happened, the price may could retrace up to the breakeven level of the open longs. I personally see this as very unlikely.

What I’m doing about it

I’m shifting my currency focus in the live, testing account. My market making strategy relies on me explicitly choosing the direction. While I feel confident about the long term direction of EURUSD, I can’t help but feel if the trade might be overextended. The CFTC version of Trader Sentiment is the Commitment of Traders. They show a new record of speculative Euro shorts while the retail forex reports show a slight bearish bias.

Trading isn’t about being right. It’s about the dollars of being right versus the dollars that it costs when you’re wrong. I’m moving my trades to where I feel more confident about the intermediate term direction, which in this case is exclusively GBP/JPY. I’m going to leave my open EUR/USD and USD/JPY alone on the expectation that they’re generally right. USD/JPY sentiment matches the GBP/JPY sentiment and the EUR/USD certainly isn’t bullish. The plan is to refocus my attention to better prospects and let other trades run their course.

Where can I track trader sentiment?

DailyFX, the research arm of FXCM, offers a tool called the Speculative Sentiment Index. They publish the results once per week on Thursday as a ratio of longs to shorts. 3:1 is generally considered extreme. When 75% of traders are long and 25% are short, the ratio is 3:1. A positive number implies future movements in the opposite direction – down. A negative number suggests that the price is likely to increase.

MyFXBook also publishes the same tool, expect that they call it the Community Outlook. I prefer their numbers for many reasons, but primarily because it updates every minute. General trader positioning shifts slowly over time. Nonetheless, it’s nice to know that you’re dealing with current information.