The RSI 25/75 Mean Reversion System uses the Relative Strength Index to gauge when a stock becomes oversold during an uptrend or overbought during a downtrend. It aims to make quick trades that last only for a few days. Historical evidence shows that the system can be profitable on over 70% of its trades, logging as much as 1% profit on each positive trade.

The system was published by Larry Connors and Cesar Alvarez in their book High Probability ETF Trading: 7 Professional Strategies to Improve Your ETF Trading. In that book, they suggest that adjusting the time period for the RSI indicator from its standard of 14 down to 4 will dramatically increase the edge of that indicator.

In their book, Connors and Alvarez backtested this strategy across 20 ETFs from the inception of each ETF through the end of 2008. There were a total of 786 trade signals on the long side that averaged a return of 1.48% per trade. The trades averaged a length of 6.2 days and 82.2% of all trades were winners.

On the short side, 383 trades were signaled. Those trades averaged a profit of 1.26% per trade, with each trade lasting an average of 7.4 days and 68.1% of those trades were winners.

Wondering if publishing the system would skew its performance, blogger Sanz Prophet tested the system from the beginning of 2009 through September 5, 2012 trading both long and short signals. His results showed that the system logged an annual return of 7.78% with a drawdown of 13.38%. He also noted that the system produced winners on 73.44% of its trades.

Compared to the other mean reversion systems we have covered, the RSI 25/75 System appears to be able to outperform the 3 Day High/Low System, but not the Multiple Day Mean Reversion System. The results for all three systems are very similar. They all accumulate small profits through lots of quick trades, and they have a very high win rate on those trades.

The issue with this system is the same as every other mean reversion system, it leave you open to taking a crippling loss. In that respect, these mean reversion systems are actually quite similar to martingale systems. They almost always produce a profit, except when a black swan shows up. The RSI is eventually going to come back to the middle where you exit the trade, and usually it will do so rather quickly. However, all it takes is one time that it doesn’t to completely wipe you out.

For both of the previous mean reversion systems, I suggested that I would be curious to see how adding a stop-loss component would impact the results. The same holds true for this system. Setting a stop-loss order for each position would allow you to guard your downside, however we don’t know how many trades would have hit our stop before eventually becoming profitable.

I have also discussed trading a mean reversion system as part of a package that trades multiple systems. If you were to break down a number of different systems and then determine a way to trade each of them when they were most likely to be successful, perhaps you could gain an edge. Again, this would require extensive testing.

Another idea that I would be interested to test would be putting a time limit on each trade. It would be interesting to explore how many of the losing trades lasted longer than the average trade length. Perhaps we could find a length that could have taken smaller losses before they became larger losses.

The current chart of the SPY provides a great example for this system. The SPY is well above its 200 day SMA, so it is in an uptrend. Its RSI indicator dipped down to 25 two times in the month of June. Each of those trades would have been exited at a profit only a few days later as the RSI jumped back above 55 both times. 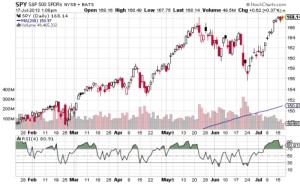 Keep in mind that this is just an example over an incredibly small sample size. The system is certainly not guaranteed to perform like this every time.