Many forex traders watch prices trade in narrow ranges for long periods of time, so they’re eager to trade breakouts when they occur. Since breakouts represent a sharp move in price, either up or down, traders focus on getting aboard the move as soon as possible.

Over-eager traders are tempted to chase the price, which can be disastrous. The trick is to get in early enough, yet not too late. Success means identifying the signals of a forex breakout, then confirming them before entering the trade. 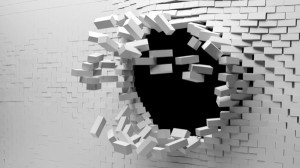 These simple strategies are focused on the major currencies — EUR/USD, USD/JPY, EUR/JPY, GBP/USD trading on hourly or daily time frames. They are short-term strategies based on only a few indicators. They rely on simple, unambiguous trading rules, and of course they’re expected to be profitable.

“Pop and stop” for bullish breakouts

The pop-and-stop forex breakout trading strategy is based on price action along with other trading indicators, such as the rejection bar candle chart pattern, Harami candle pattern, round-number forex price levels, Bollinger Bands, polarity indicators, or other indicators of nearby support and resistant levels.

The candlestick chart above shows a break out near the beginning of a forex trading session (left circle), as well as a bullish rejection bar that formed an unrelated pattern without a stop-and-pop trading opportunity (right circle).

It’s usually difficult to know what causes the upside break until later – Often, it is due to a news announcement or simply the weight of heavy players taking long positions in the base currency.

In any event, the price “pops” out of its previous range, then briefly “stops” before resuming its upward march. This trade opportunity is shown by the left-side white circle on the chart above.

The left-circled chart pattern above shows 2 bullish rejection bars being formed and rejecting above a round price number, which is the gray line. During the third period, the trade is entered at 2 pips over the high of the second rejection bar.

Typically, a forex breakout in one direction showing a long candle is followed by a retracement back to the level where the price first exited from the range. This happens when the rapid price move has occurred because of a liquidity gap across a range with few orders.

Rejection bars and other confirmation of the breakout

The gaps are usually filled sooner rather than later. If the gap isn’t filled, then the move is truly a breakout.

Before executing a trade order, the trader should make sure the forex breakout is confirmed. After the initial “pop,” it’s important to wait for confirmation, since the price could continue to rise, or fall back into its recent range again. 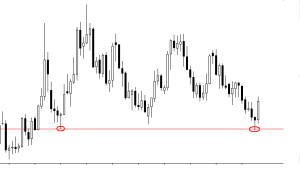 Rejection bars are the most common signal confirmation for the pop-and-stop forex trading strategy and other strategies based on candlestick chart patterns.

This bar is typically formed when the price opens and moves first in one direction, then reverses to close the candle period at or past the opening price.

When rejection bars find resistance at round-number forex price levels and other support-resistance-inflection points, it is a good sign that the price will soon move upward again.

The tail on each rejection bar should be at least as long as the body. The longer the tail, the better the signal, since this shows stronger rejection from the low.

A mechanical forex trading system can be programmed to trade breakouts based on the candlestick charting parameters and other technical indicators.

The Harami is a pattern which can help confirm both bullish and bearish breakouts, including the exit point from successful “long” trades. It consists of one long candle followed by a shorter candle whose body is within the range of the larger body.

Regarding color – The bearish Harami in the below chart shows the typical downward-moving (black) candlesticks with significant “wicks” which signal an impending retracement.

Mechanical trading systems can calculate the candlestick values and apply the appropriate trading rules to use Harami candles to signal either the end of a bullish runup, or a rally after a downtrend. 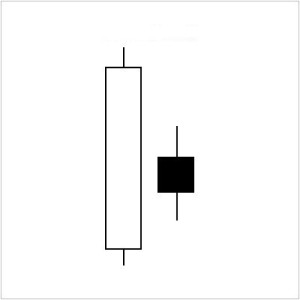 As shown within the second white circles in the two price charts, the pop-and-stop strategy can be traded together with the counter-move reversal strategy, if the price happens to reverse and fill the gap.

The pop-and-stop strategy takes advantage of the continuing move after the gap-up. Here are the parameters that signal a bullish trade opportunity:

• The price was trading in a narrow range after a big move during the previous time period
• The price “popped” out of its range, then “stopped” moving
• The price should next form the confirmation pattern – A “rejection bar” from the nearest round-number price level
• The price forms a second rejection bar
• Other indicators confirm the expected movement, including Bollinger Bands, polarity oscillators, or proximity to round-number forex price levels, or support and resistant levels

During a bullish breakout, the simplest way to trade the price move is to place a limit order 2 pips ahead of the strongest rejection bar.

For an aggressive strategy, the stop loss can be placed just below the tail of the strongest rejection bar. A more conservative approach is to place the stop-loss order just slightly below the high of the recent range.

The chart above shows the entry point for trading a bullish breakout using the pop-and-stop strategy (left circle) as well as the bearish signal for exiting the trade (right circle). The bearish candles form a Harami candlestick pattern.

The above chart shows the forex price faltering at the polarity indicator, then breaking downward in a series of strong bearish candles below the preceding range. The first drop-and-stop trading opportunity is shown in the left circle.

Although the following candlestick wasn’t fully confirmed by bearish rejection bars, still, traders can enter after the close of the bearish candle.

The mechanical trading system should set the entry point at one or two pips below the monthly pivot, as in the above chart, or another reliable indicator such as Bollinger Bands, polarity indicators, or nearby trading range levels.

The second circle above shows another drop-and-stop trading opportunity, with a bearish near-rejection candlestick confirming the signal. The trading system should enter the trade at the low point of the strongest rejection bar or most bearish candle.

Be wary of false breakouts

After an apparent breakout, there is a risk that the gap may be “filled.” It’s important to use the subsequent rejection bars as confirming indicators before entering the trade order. It’s also best to trade a pop-and-stop bullish breakout in the direction of market sentiment, especially after news causes a price breakout from a narrow trading range.

The pop-and-stop breakout strategy should only be deployed in the major, highly-liquid forex currency pairs which have enough support for the rally to continue. At the same time, the trader should be aware of upcoming news or corporate announcements that might quickly reverse market sentiment and fill in the recent price gap.

Timing and volume are critical for breakout success

High volume is the single most important confirmation for a breakout and subsequent showing of trend.

Predictably, the highest currency trading volumes happen when the New York and London sessions overlap for several hours. This is true even for currencies like Japanese Yen or Australian Dollar whose underlying marketplaces are not open during these time zones.

And, the lowest total forex trading volume is often seen after the New York session closes, in the couple of hours before the Tokyo market opens.

This is important because intraday and daily forex breakout strategies like “pop-and-stop” and “drop-and-stop” are more likely to be successful when there is a high trading volume and pricing range, and large number of market participants.

Since London is a leading global forex trading and financial center, it often sets up a short-term trend which affects other markets opening at London’s tail end. The early part of the London session is especially promising for profitable “pop/drop-and-stop” breakout trades.

With a good Expert Advisor (EA), the mechanical trading system can be prepared for breakouts which often happen at the open of forex sessions in London and New York. In fact, these breakout strategies work especially well for the London open.

The pop-and-stop is a short-term, bullish breakout-scalping strategy. It’s best to set tight stops, say 2 to 5 pips, and take profits fairly quickly. When trading the major currency pairs, the safe take-profit limit seems to be a ratio of about 1.5:1 or perhaps 2:1.

Beginning around 8:00 GMT when the London session opens, the mechanical trading system watches the highs and lows of the candlesticks. The system goes “long” if the forex pair price penetrates the high of either or both of the rejection bars, and the price is above the 50 SMA.

The system goes “short” if the price goes below the lowest point of one or both of the rejection bars, assuming the price is below the 50 SMA.

Position size should be limited to no more than 2 or 3% of the trading account equity.

To reduce the risk of trading over-correlated currency pairs, the system places a maximum of only one open trade per day, whether long or short.

Any forex trading strategy focused on breakouts requires appropriate risk management. When using “pop-and-stop” and “drop-and-stop” breakout strategies with confirming indicators, traders should use stop-loss levels only a few pips away from the entry points.

For either long or short positions, the mechanical trading system automatically places the stop-loss exit order at a level from 2 to 5 pips away from the entry point.

Once the price moves favorably, the trading system moves the trailing stop along to the next support or resistance level as shown by the preceding candles, and keeps it updated.

Anecdotal reports of backtesting by some forex traders using these two breakout strategies have indicated potential returns of up to 60% in about 8 months, which is a compound annual growth rate of over 100% while max drawdown was less than 13%.

Forex breakout trading with mechanical systems based on “pop-and-stop” and “drop-and-stop” strategies can earn respectable returns as long as the trader relies on appropriate confirmation that the breakout will continue, including rejection bar and Harami candlestick calculations, or other indicators such as Bollinger Bands and support-resistance oscillators.

Before entering the market, a forex trader should check for high trading volume and a broad range of market participants. For traders who correctly time entries, breakouts can be very profitable moves.

Do you use any breakout strategies?