One of the popular steps in the evolution of a new quantitative trading strategy is testing the strategy out by trading it on a simulated account. This enables a trader to get a feel for how the system functions in real time without putting actual capital at risk.

The advantage of zero risk simulated trading accounts is also the biggest disadvantage. These practice accounts don’t force a trader to have any type of commitment to the strategy. Without real money on the line, a trader will never know for sure if they will actually be able to handle the ups and downs of the strategy. 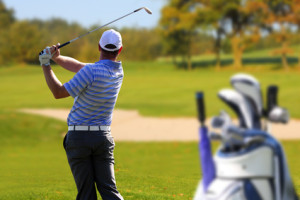 Actual trading is much more complex than simulated trading in the same way that actually golfing is far more difficult than simply hitting balls on the driving range.

An article published on Forex Crunch this week illustrated some of the dangers of demo trading. The concept that the article stresses is that simulated trading can be a great tool for learning the mechanics of a given strategy, but there is no guarantee that a trader will be able to approach a real-money account with the same psychology.

There is a world of difference between whacking drivers into a large open field and hitting tee shots down a tree-lined fairway.

The article makes an interesting comparison between trading and golfing. It suggests that trading a demo account versus a real-money account is like hitting golf balls on the driving range versus playing on an actual course.

There are a lot of similar differences that could be pointed out here. Much like in golf, the environment plays a major factor in trading. It is much easier to pull the trigger on a risky strategy in a demo account than with your hard-earned savings. There is also a huge difference in the level of focus and discipline required.

One of the biggest differences that I have seen in many simulated accounts is that the amount of capital is far greater than the trader testing the strategy ever intends to trade. It is very common to see traders testing strategies on $100,000 demo accounts, even though they only intend trade with $10,000 in real capital.

This difference in capital can lead to tremendous variations in transaction costs and margin requirements. Many times, the markets that are being tested in the $100,000 demo accounts can’t realistically be traded with the capital that a trader actually has.

Another key difference between trading simulated accounts and actual capital is the amount of discipline required. The fact that the simulated account “isn’t real” makes it far too easy to look the other way and sweep the bad trades under the rug.

Trading real money takes a lot of discipline and attention to details. If a trader does not employ the same level of discipline in trading the demo account, then the results will never be comparable.

Hitting a 300 yard drive straight down the middle of your local driving range while no one is watching is one thing. However, hitting the same shot on the 18th at Augusta with the whole world watching is far more difficult.

Just like that golf shot, it is far easier to play fast and loose with money that isn’t real.