After evaluating the SMA 200 reversion idea on the M1 charts, I realized that the strategy required a higher time frame to earn a profit. Trading costs were otherwise far too high.

The bottom axis shows the percentage distance of the price away from the SMA 200. The vertical axis contains the frequency that the price achieves that distance from the moving average.

The most interesting observation about these charts is how the shapes of the lines change as the time frames increase. Part of the effect is obscured because the horizontal scale is mushed on the M30 chart.

Blowing them up to full size reveals that the amount of curvature decreases as the time frame increases. The plot looks more and more like a straight line on higher time frames. 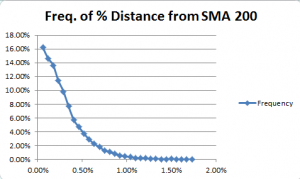 A distance frequency plot on the M5 chart. 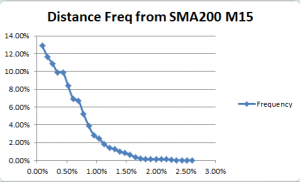 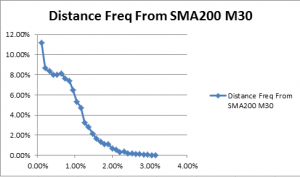 The best result jumped out when I finally made it to the M30 charts. The pattern is obvious. Profitability potential jumps as the time frame increases.

The best candidates that I identified on the M5, M15 and M30 charts all coincide with the inflection points of the curves.

I highlighted the final item in red. It appears to be the first candidate that can overcome trading costs. None of the backtests include the spread in the final results.

I assume that the best case final scenario after slippage and everything that goes wrong with trading is an average spread of 2 pips on the EURUSD. There were 60 trades in the candidate strategy and each trade was for 1 standard lot. The cost is therefore $20 in spread per lot per trade * 60 trades = $1,200 in costs.

I would love to evaluate higher time frames. The problem is that we’re already limited to 60 trades in our profitable trade set. Cutting the potential trades in half or more eliminates the ability to extrapolate anything from the data. M30 is the end of the road for the strategy.

The real question now is to extrapolate the capital required to earn $1,310. The backtest traded 1 full standard lot per signal. There’s no hard and fast rule here. I would set the absolute minimum floor for the strategy at $5,000. That’s probably too low, but it could at least handle some drawdown. That puts the leverage at 20:1 and the theoretical profit for 2011 at 26.2%.

I personally wouldn’t consider trading full lots with less than a $10,000 starting balance. That puts the potential return at 13.1% and seems much healthier.

Also, remember that strategies can scale up and down. The percent return and leverage could remain unchanged if the lots traded and starting balance decrease proportionately. A $1,000 account trading mini lots accomplishes a 13.1% return of $131.00.

The next step is to evaluate the strategy on a walk forward basis, which I intend to do in the next few weeks.

Related articles:
Group trading strategy – the first in the series that explains the trading rules and genesis of the idea.
Time Frame – where I figured out problems related to the M1 charts