The Stochastic Oscillator can be extremely helpful indicator for determining a market’s momentum. One strategy to benefit from the power of this indicator is to pair it with a 200 unit simple moving average (SMA). This ensures that you are only taking the signals that go in the same direction as the overall trend of a given market.

Chart and Instrument: Any

The strength of this system is that it always trades in the same direction as the long term trend. This means that it is never fighting against the current. The system also does very well at timing entry points and should have a strong percentage of successful positions.

The weakness of this system is that it will likely exit a position too early. Rather than continue to ride a given trend, this system is more likely to jump in and out of the trend a number of times. While most of these trades are still winners, this overactive trading will cause slippage and fees to eat away at profits. 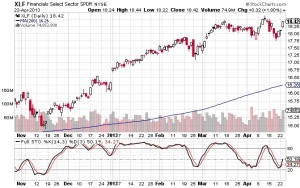 The ETF for the financial sector, XLF, shows a stochastics buy signal

As you can see on this chart of the XLF, the Stochastic Oscillator gave a buy signal at the end of November when the %K line crossed above the %D line while the stock was trading above the 200 day SMA. This was an excellent place to buy the XLF, however the Stochastic Oscillator gave a sell signal a few weeks later, which was followed by many more sudden signals. While most of these signals were correct in the short term, depending on your approach, you might have been better off to hold through all of them.

Since the weakness with this system is in the exits, perhaps using a different indicator for exits could improve on its performance. I recently discussed using average true range (ATR) to set initial stops. This would be a good way to let the trade run its course, rather than jumping in and out repeatedly.

About The Stochastic Oscillator

The stochastic oscillator is a momentum indicator developed in the late 1950s by George Lane. The indicator is a representation of the closing price of a market compared to that markets price range over a set period of time. The concept is that markets close near highs during uptrends and near lows during downtrends.

Since both %K and %D represent percentages, both have a minimum value of 0 and a maximum value of 100. A value of 50 is the midpoint, while a value over 80 is considered overbought, and a value under 20 is considered undersold. It is important to remember that overbought and oversold conditions do not necessarily signal a change in trend. During strong uptrends, markets can remain overbought for an extended period of time. The inverse holds true for strong downtrends.

The Stochastic Oscillator gives a signal when the %K line crosses over the %D line.

How can we improve this strategy? Let me know your ideas in the comments section below.