Many of the trading systems I have profiled stem from the interesting books written by Larry Connors and Cesar Alvarez. Their research focuses on short term, mean reversion systems that look to take quick profits when trending markets become temporarily oversold.

Cesar Alvarez recently launched his own blog, and one of his first posts addressed the issue of whether mean reversion strategies are still valid in today’s market environment. He begins by discussing how he has a friend that continues to challenge him on the issue, demanding proof that the strategy is still profitable.

Alvarez set out to test the following theory:

My theory is that mean reversion is in hibernation waiting to come back; or said another way, mean reversion is simply mean reverting. I think that when too many people trade mean reversion, the space gets crowded and we see fewer winning trades and smaller returns. However, this has always been conjecture never backed up with numbers. Are we really seeing fewer trades? Smaller returns?

In order to test his theory, Alvarez took the top 1,000 stocks in terms of dollar-volume from the beginning of 2001 through August 30, 2013. He used a 2-period RSI value under 5 as his entry signal, and then exited when the value rose above 70. Entries and exits were all calculated by closing prices and the data set was free of survivorship bias. 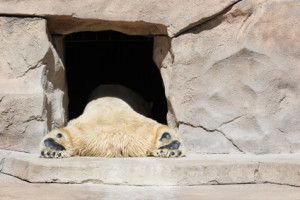 Alvarez believes that mean reversion strategies are simple in a period of hibernation.

The first question Alvarez sought to address with the data that he produced was whether fewer oversold opportunities were presenting themselves:

The blue line is the percent of stocks with RSI2 < 5 compared to all the stock for a given year.  This has hovered between 5.1% in 2009 and 8.0% in 2008. The green line is a liner regression of the data. We can see that the trend has been down since 2001 but not a lot.  The trend from 2005 to 2007 compared to the trend from 2011 to 2013 looks very similar. Is this trend because we are in the same cycle of a bull market? Is mean-reversion in hibernation? Given the trade data, I would say yes. Nothing appears out of the ordinary.

Next, Alvarez looked at whether the average profit had changed:

Alvarez concludes that basic mean reversion strategies are currently finding less signals than in past years, but are still quite profitable. He suggests that the strategy is just hibernating and is poised to make a strong return.

We are at the low of the number of sold off stocks per year but the average # profit/loss is the middle range. The numbers do not tell me anything is out of whack with mean reversion. Mean reversion is not dead but it looks like it is coming out of hibernation.