The gains can accumulate quickly when a prop trader is using a strategy based on maximum leverage with limited account size. In order to preserve and build those gains, it’s important to remove them from the trading account according to a good plan.

As described in previous articles in this series, the high-leverage, low-balance strategies used by leading prop traders can be applied to multiple trading accounts using different systems, with each account capitalized by not more than a couple thousand dollars.

The amount in the account typically ranges between $1,000 to several thousand dollars. That way, there’s no psychological obstacle to using the max leverage on each trade.

Reduce the risks from drawdowns

When you have a winning system, profits pile up. It’s tempting to “let it ride” by using the same system to trade ever-bigger position sizes in the growing account.

However, when the entire capital is available in the trading account, it means that the capital is exposed to the inevitable system “blow up,” which typically causes a steep drawdown. Even if the trader escapes financial catastrophe, he or she may become so risk-averse afterward as to become indecisive and ineffective.

Pull money out each month

The smart way to avoid excessive drawdowns due to trading system “blow ups” is to pull money out of the account at the end of each successful month. That way, when a major drawdown occurs, it won’t take all your money, just the couple thousand dollars that you can afford to lose.

Successful prop traders like Shaun sweep the profits out of each winning trading account monthly and move them into a non-trading account, where they remain safe. So, each month the trading accounts open with their individual capitalization set at a given amount.

Pull out at least enough to cover one “blow up”

Once you’ve launched your forex system, you’ll want to think about earmarking enough money to cover at least one trading system failure. After you’ve secured that amount to be used for a recapitalization of your trading account, every subsequent gain is “free money,” at least in a psychological sense.

The first milestone is to pull enough money out of the trading account to cover at least one catastrophe. If you’ve been enjoying mostly winning months, next you should allocate 50% of your profits for high-risk systems.

You can’t lose what’s not at risk

Keep in mind: When a prop trader is using maximum leverage, the only money that’s safe is the money already pulled out of the trading account. Profits should be pulled from each winning trading account, each month.

When a prop trader wins consistently using high leverage with a limited-size account, the gains from relatively small individual trades may compound quickly. Profits gathered from the overflowing small trading accounts can compound into large sums, and it’s important to manage those profits effectively.

If you’d like to learn more about using maximum leverage to pull profits each month, just contact Shaun.

As mentioned in a previous article about managing your forex venture like a “prop trading” business, using maximum leverage can truly minimize your at-risk capital. Successful prop traders leverage their accounts and risk every dime of allocated capital each month.

The idea is that a winning trading system will accrue profits quite rapidly, but if the position sizes are increased along with the expanding account size, eventually a “blow up” will intervene to cause a steep drawdown.

The key is to mechanically limit the amount of capital allowed to accumulate in the trading account during winning periods. Prop traders set a par account size, and at the end of each month they “sweep” the overflow from gains into a separate, non-trading account. The account opens each new trading month at the same par size.

By doing so, gains are preserved intact while serious drawdowns are limited to the account’s monthly highwater mark. Profits from winning months are retained, and are protected from risk.

By sweeping excess cash from the account, a prop trader reduces the risk from a catastrophic drawdown. The traditional practice of small, independent traders is to treat the entire account as a single unit which they attempt to grow as large as possible. Yet, this can be dangerous.

At some point, every system suffers a “blow up.” When this happens, everything may be lost if the trader hasn’t stashed away some of the previous profits. Prop traders avoid this catastrophic scenario by limiting the trading account size.

As a trading account grows, the savvy prop trader pulls profits out in order to keep them safe. For example, at the end of a given month, assume that a trading account whose par value has been set at $5,000 may now total $6,00. So, the overflow $2,500 is swept into a separate account not accessible for trading or margin.

The trader then begins the new month with the par $5,000 and once again the account should begin to accrue gains at the same consistent rate, by using the same trading system.

By trading a winning system while using maximum leverage and limiting the amount of capital at risk, an entrepreneurial prop trader can harvest profits from a wide range of forex markets. And, traders who are supported by prop shops have access to highly sophisticated risk-management tools to help them grow even faster.

One of the most commonly heard phrases in the quantitative trading world is that “past results do not guarantee future performance.” While this could be chalked up to a bunch of nerds covering their you-know-whats, there is actually more to consider here.

We all know that the fact that a strategy performs well over a given backtesting period by no means indicates that it will perform well in the future. We know that there are plenty of different biases that come into play when backtesting strategies on any market. We also know that markets can fundamentally change at any time, rendering our favorite strategies ineffective. 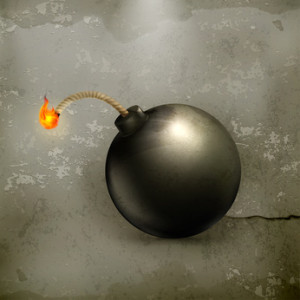 Much like a bomb, our systems could blow up at any time, regardless of how good their backtesting results might be.

But let’s be honest, we don’t really think that will happen to OUR strategy. Those are the kinds of stories that happen to some other trader. In a recent post on his blog Mechanical Forex, Daniel Fernandez explored the topic of backtesting and future profitability. He began by explaining why we backtest in the first place:

When we want to trade the financial markets we need to design some sort of strategy that is able to give us an above random chance probability to succeed — a trading edge.

In order to solve this problem the first impulse is to look at trading mechanisms that have succeeded in the past and then attempt to trade this exact same techniques going forward in order to generate similar profits.

Then, he begins to point out some of the false assumptions that backtesting leads us to make:

The idea therefore seems pretty straightforward, generate some system that performed significantly well for as long as possible into the past and this system should work in the same way going forward.

We make several important assumptions such as: the market will behave in the future as it has in the past, the longer we back-test into the past the more market conditions we cover, etc.

Daniel also points out some other issues that our backtesting may encounter:

Does the market really behave as it has in the past?

Does having a strategy with long term profitable back-testing guarantee profitability to any degree (does it even increase our chances beyond random chance?)?

As you can see, Daniel addresses a number of different assumptions that we are prone to make without even realizing it. He continues by defining a conservative Forex system that could have easily been constructed in 2001. This system would have looked great through backtesting results, but would have fallen flat on its face and blown up had we started trading it live in 2001. He also profiles a statistically similar system that would have performed well starting in 2001.

Daniel explains how many quantitative traders would have handled this case study:

Many of you would be tempted to perform elaborate statistical analysis to attempt to find differences between them so that you can say: “system A failed because of this and this while system B didn’t fail because of this and this”, in reality you can find no definitive answer (as least I haven’t), there is always a probability for a system to fail bluntly, regardless of its past statistical characteristics.

The important takeaway here is that any system, regardless of how well it has performed in the past, any system can stop performing well at any time. As quantitative traders, we must always be on alert for changes in market conditions that could negatively impact our systems.