Over the years, how many blogs posts have you read that preach, proselytize and lecture you on discipline in trading? I bet if you had a dollar for every one you’d consider early retirement, wouldn’t you? We all realize that discipline is very important in trading; it’s common sense, really. But that doesn’t teach you how to avoid the pitfalls of irrational decision making in trading. For that you must understand what drives you to make an irrational decision when trading. If you dig around for that reason, and all of the trading blogs unanimously concur, that reason is greed. Well, I agree, that that was the way I used to think. But as I will soon explain, the reality is that nothing could be further from truth.

A Moment of Enlightenment

Throughout the many years of my career I have had the opportunity to analyze the performance of at least a thousand traders. Intuitively, I believed that the reason for irrational decisions had to have deeper roots than just greed. The problem was it was hard for me to connect the dots. That is until I stumbled through the works of a Dan Ariely, a professor from Duke University. Ariely, through his numerous books and writings, illustrates time and again how and why we make irrational decisions. Though Ariely doesn’t specifically deal with the trading dilemmas we all face, his insight helped me connect the dots. With a picture now drawn, I hope to enlighten you as to why you do what you do in trading and how you can avoid the pitfalls.

Ariely concluded that the way we initially feel about a specific matter impacts that particular decision as well as subsequent ones. We can apply his conclusion to trading. Let’s say you’ve just begun to trade and you decide to open your very first trade with high leverage. And, hey! Will you look at that! You’ve gained money! That was exciting and exhilarating, wasn’t it? The problem? It establishes precedence.

Now you’ll expect to be excited and exhilarated every time you trade. As if you’ve got the magic touch; press the buy bottom at just the right second and win a fortune. But in real life? You need an accountant’s state of mind; prudent and suspicious, relying only on data to make a decision. The problem is you’ve already got that blue print in your brain that says trading is exciting. So, almost automatically, you subconsciously push yourself to trade at high risk. Or else you open a trade without good reason, simply because of that imprint of excitement towards trading.

Hack Tip #1: Start with a very small amount (real money, not a demo); enough that you’d only slightly care if you lost it. It should be enough, though, that you’re excited if you profit. That’s the idea behind low leverage. Do that for several months, and you’ll eventually get used to making more rational decisions. That’s because you won’t associate trading with excitement. Although you might lose that sense of “fun,” it’s really the only way to become a rational trader. The bottom line is you’ve become an “adrenaline junkie” trader. You need to give it a few months to wean yourself off of the “excitement.”

In the retail trading world we like to believe that every successful trader has something special, a so-called X-factor. That would be some unique character, trait or talent that makes for a great trader. Of course, much as we’d like to believe we all have this X-factor, that’s utter nonsense. Trading is all about statistics and constant analysis. Period.

Often, we (unknowingly) produce stagnant results that could never dispel the notion that we’re really just run-of-the-mill traders. We’ll always be in the game just enough so that when we profit, even a little, it’s because of our “gift.” If we should lose a little, well, that’s really no big deal. Traders may think like that for prolonged periods because it keeps the illusion alive. So long as they’re not out of the game, they’ll stick with it. They’re not willing to try out a new strategy. Sure, it could produce more gains but it might also mean deeper losses. So they’d rather stay stagnant, and maintain the status quo, such as it is.

For many, this is the perfect scenario to feed their ego. If we gain, we’ll throw a BBQ on Sunday and boast (gloat) about it to our friends. But if we lose? Well, no one has to know about that except you and your broker.

Hack Tip #2: Think of your trading as a business. Find a friend who has some financial background and share your performance with him. Even better, share it with your accountant. With someone looking over your shoulder, you’re forced to acknowledge that there’s a down side to losing. That may give you the incentive you need to avoid stagnation. If trading is a business – and it is – you need a different mindset. Every business is in business to make money. Your friend/accountant is sure to tell you that immutable fact if you should ever forget again. 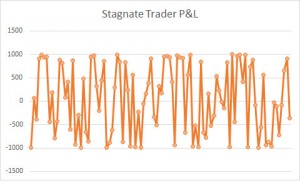