The trading blogosphere is full of articles about the importance of timing your trade. Certainly, it’s important; identifying the right trend, knowing when to open or close – all integral to the trade. But here is the thing, there’s another dimension and timing is only half the story. You see, in the real world, it’s not just about the timing of your entry and exit but also the time between. In fact, the duration of your trade matters a lot more than you might think. In this article I’ll discuss the various aspects in which time can affect both short and long term strategies.

Let’s consider a theoretical trading situation, looking at two strategies. The first is a high frequency one designed at gaining 1 pip, with every trade taking a single second. We’ll call this Strategy A. The second strategy, Strategy B, is designed to generate a profit of 10 pips every 10 seconds. So which is the better strategy? On paper, both should generate 60 pips per minute hence equal returns. But in the real world? Well, that’s an entirely different story.

In real life, when you aggregate the results of the two strategies, you’re going to be in for a big surprise. Under Strategy A you had a profit of 50 pips after 1 minute. But under Strategy B you had a profit of 66 pips. Now which strategy do you think is better? Of course, you’d pick B. Interestingly, per trade, each strategy profited exactly as planned. Strategy A profited 1 pip and Strategy B profited 10 pips per trade.

So what made the difference? The time. As you can see below in the two charts, strategy A, when executed, took a little longer on average than initially expected. From the measurement of the duration of trades it clustered around 1.2 seconds per trade rather than 1 second. In Strategy B, the measurement of duration per trade, on average, is about 9 seconds. When executed, Strategy B trades took less time than initially expected. Eventually, at the end of the day, Strategy B returned 66 pips or 32% more than Strategy A’s 50 pips. That means Strategy B is the superior choice.

Now, let’s look at this a bit closer still. We’re going to take the duration of each of the trades executed and measure the standard deviation (a simple exercise in Excel). You would discover that in Strategy A, while the average might be 1 second per trade, the standard deviation is high. That suggests the cycles are not equal thus the strategy is less efficient. On the other hand, Strategy B has a low standard deviation, meaning most trades are close to 10 seconds. Therefore, it has more predictable returns and, hence, a more effective strategy. When you measure a strategy, understand that beyond returns and risk, the time each trade takes matters. And in fact, it can matter quite a lot. 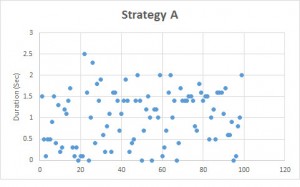 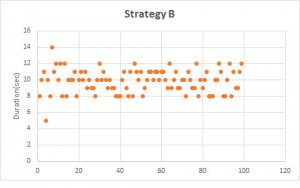 So now we understand how the nuances of time can affect the eventual returns of each strategy. Yet when it comes to longer duration trades (i.e. weeks or months) there is still another element. In this case, it is the amount of time the trade has been positive.

Let’s look at another theoretical scenario. This time, we have Strategies C and D, each has the identical duration of two weeks. Likewise, both have the same standard deviation of duration and roughly the same returns. But one strategy is riskier than the other. The question is which? The answer is the strategy that has been profitable for the least amount of time. Say you opened two trades; Strategy C was profitable for 12 of the 14 days it took to reach its target. Strategy D had been negative for the first 12 days before producing steep returns in the last 2. Strategy D, then, is clearly more risky because you are risking a loss for a longer time. This also suggests that, perhaps, the entry signal for Strategy D is not very well calibrated. Strategy C is clearly more effective and less risky, on average. 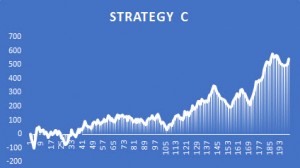 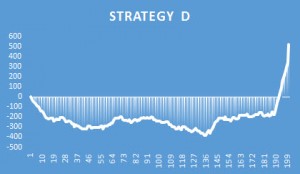 Of course, there are many more aspects to measuring time effectiveness in a trading strategy. There are also other dimensions to examine beyond just time. But the lesson here is clear. The next time you measure your own trading strategy remember that time isn’t just about timing.