If you think Silver trading is almost identical to Gold trading, you are wrong. But if you think Silver is utterly different you are wrong, as well. Confused? Don’t be. Trading Silver has a lot of similarities to trading Gold but there are two key dimensions that impact the way Silver behaves in relation to Gold—volatility and the Gold-Silver ratio.

Below is a comparison of Gold and Silver volatility levels. It’s hard not to notice that Silver is substantially more volatile than Gold. The reason for that is because liquidity in Silver futures across the exchanges is substantially lower than Gold futures. This, of course, means that smaller amounts (albeit still in the billions) can move the price of Silver much more than Gold. As a trader you should accordingly adjust your strategy to higher volatility. 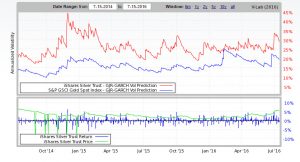 In practice, Silver’s higher level of volatility first and foremost has an implication on stop losses. Because higher volatility tends to trigger more stop losses it means more margin of safety is needed when you place your stop loss. In other words,if you are trading silver, you have to place your stop loss a little further to make sure a sudden burst of volatility won’t throw you off the trade only to later hit your market. Of course, this also means you might reconsider certain trades, because if your stop loss is now further from your entry but your limit stays where it is your risk reward ratio is now lower and that could mean your trade is not necessarily worth it.

The second noticeable impact of higher Silver volatility is the manner in which Silver trends behave. Both Gold and Silver have a tendency to move in bursts of momentum but in Silver, the bursts tend to be stronger because of the higher volatility. As can be seen in the example below, both Gold and Silver eventually gains more or less the same percentages. But while Gold’s ascent was more gradual, Silver lagged Gold only to catch up with it later, in a fraction of the time and with a strong burst. This, of course, can be of great value for the Silver trader, especially one who can exploit such opportunities to make a rather quick gain from Silver catching up with Gold.

Perhaps one of the most important ratios in the commodity space. The ratio, as its name implies, measures the price ratio between Gold and Silver. In other words, how much Silver is Gold worth? Why is that ratio useful? Because the ratio between Gold’s price and Silver’s price moves in cycles (see chart below).

When the ratio is at cyclical lows Silver is relatively cheap compared to Gold. In a bullish run it usually means that Silver’s price has more upside and will therefore outperform Gold. The same goes for a bearish trend. When the ratio is at cyclical highs then Silver will underperform Gold, both on the way up and on the way down. Therefore, watching the Gold-Silver price ratio allows you to gauge the potential momentum w 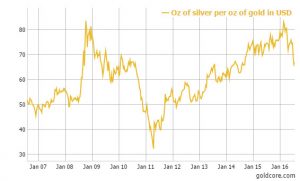 In practice, this means you can expect Silver to outperform Gold when the Gold-Silver ratio is at cyclical highs. A classic example occurred in 2011 when as the Gold-Silver chart was at record lows (see above) which resulted in Silver outperforming Gold on the way up (see below). As the ratio gradually moved into cyclical highs, Silver started to underperform Gold again.

Sometimes, Silver just moves too high too fast. When that happens it’s better to bail out before the burst. On the other hand, sometimes Silver lags, so much so that you have to ask is it worth riding on volatility to catch up? The key to trading Silver is understanding its similarities with Gold but exploiting the differences between the two.