Importing numerous stock symbols into NinjaTrader is a tedious process. If you’ve ever used the Instrument Manager and want to create a list of the most liquid ETFs, you know what I’m talking about.

There is a far, far easier way to import multiple stock symbols into NinjaTrader without using the Instrument Manager.

Go to the control center, the main part of the NinjaTrader Program. Click on File, Utilities then Import Stock Symbol List. 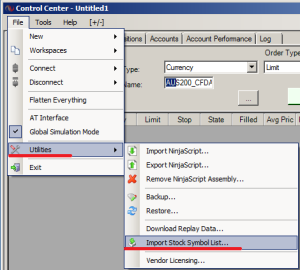 The new screen brings up a text area. Type in the list of symbols or click on the small Load button in the middle of the screen towards the left side. That allows you to import a list of tickers if they’re already typed into a file. 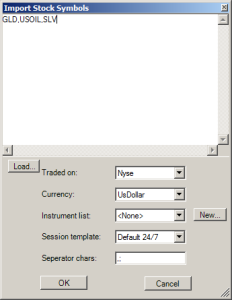 “Traded on” is the exchange where these instruments trade. You can use Nyse if you’re not planning to trade live. The symbol mapping is only important when it’s time to use NinjaTrader for live order execution.

My final tip is that you can assign all of these instruments to a list. The screenshot depicts a few commodity ETFs. It makes a lot of sense to categorize those instruments into an ETF list. You could click the “New” button to the right or, if you already created a list with that name, select it from the drop down menu.

Early in September, Jeff Swanson from System Trader Success wrote an interesting article that completely ignores the price. He suggests that a large number of system traders focus exclusively on price based data. Since the market generally rewards those who stray from the crowd, he reasoned that it might be worthwhile to develop a system that uses a non-price based indicator.

The non-price based indicator that Jeff elected to build his system around was the Short Term Trading Index (TRIN). This is a relative strength ratio that uses the advance / decline ratio and the advancing / declining volume to produce and oscillating value. TRIN values below 1 indicate general market strength, and TRIN values above 1 indicate general market weakness.

For this system, Jeff planned to trade S&P Futures contracts and use the TRIN value for all of the NYSE stocks. He combined that indicator with the 2-period RSI and used the 200-day simple moving average (SMA) as a trend filter. The system will combine one price based indicator and one non-price based indicator to identify short-term weakness in the market during long-term uptrends. 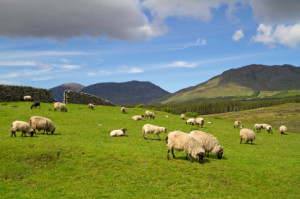 Is your trading system just another sheep in the herd? The TRIN takes a completely novel approach to trading

Jeff backtested this strategy on the E-mini S&P Futures market from September of 1997 through September of 2013. Starting with an account of $25,000, the system produced a net profit over that time of $24,470. There were a total of 91 trades.

The system registered a profit factor of 2.2 and won on 76% of its trades. The average annual rate of return worked out to be 4.49%. As usually happens with rough system ideas, the biggest problem with Jeff’s TRIN system was the maximum drawdown, which was over $11,000 at one point.

Following the backtesting results, Jeff makes it a point to remind us that this is a very rough idea for a system and that its return could be improved but implementing stop-losses and money management. That is the first recommendation I make to improve just about every system we have profiled here.

This system will trade much like a lot of the short-term mean reversion systems I have profiled. It has the same open-ended loss capabilities as those systems as well. Using a simple ATR multiple stop could go a long way towards protecting profits or even just keeping losses small.

One of the improvements Jeff makes to his TRIN system is to add a bear market component. When price is trading below the 200-day SMA, he still looks to enter long positions, he just lowers the required 2-period RSI value. This forces the system to isolate only the very best situations.

I would be interested to see how the TRIN system would perform if instead he reversed all of the entry rules and looked to short the market. In a lot of the backtesting data that I have seen, adding a short component will decrease the overall profitability of a system on a per trade basis, but it will also increase the number of trades that system is able to generate. It would be very interesting to see how that would have worked here.

Another way to improve the system would be to find a way for it to generate more trade signals. This could easily be done if it was able to trade multiple markets. However, because it uses the TRIN value of the NYSE stocks, it would not be likely to perform very well in other markets.

One way to get more exposure would be to couple the system with another system that could be traded when the equities markets are not above the 200-day SMA. Trading a simpler 2-Period RSI System on commodity or bond futures during these times would certainly increase the number of overall trades, which might improve the numbers across the board.

About the TRIN Indicator

The TRIN Indicator was developed in the 1970s by Richard Arms. It is also referred to as the Arms Index. The name TRIN is short for TRading INdex. The TRIN is calculated by dividing a group’s advance/decline ration by its advancing/declining volume.

TRIN is most popularly used on the NYSE and Nasdaq because their advance/decline data is widely available. Because bull markets are generally accompanied by large volume, TRIN numbers below 1 are considered bullish. TRIN numbers above 1 are considered bearish. The further the number moves from 1, the more bullish/bearish it becomes.