Andrew posted a great comment on the Scalper EA noting how he increased profits dramatically with position sizing. You can think of the expert advisor as the orange and the potential profit as the juice. We want to squeeze out every last drop. 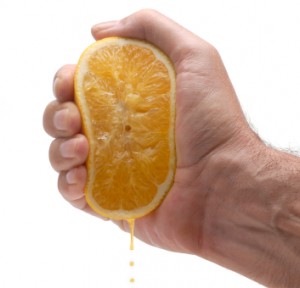 I always talk about winning percentage and the R multiple together. It doesn’t matter that if win 99% or 15% of the time. It matters how much you win compared to how much you lose. Winning frequently does not correspond to profitable trading.

Only when you know the percent accuracy and R multiple can you determine expectancy: do I expect to make a profit or not following this expert advisor? 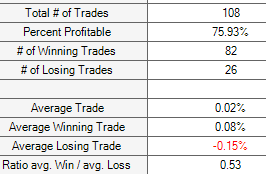 I don’t know either for a certain fact. The real accuracy and real R multiple may be above or below the numbers seen in backtesting.

It’s important that we consider how we developed these numbers. I found them after analyzing an entire year’s worth of chart data. There’s a real risk that they overestimate future performance.

The forward test for 2012 discounted that notion – the R multiple and percent accuracy numbers actually improved on the blind data. But, as most of you know, I’m extraordinarily risk averse.

I assume the worst case scenario in nearly everything that I do. If the worst case isn’t so bad and the average case is fantastic, that’s the only threshold that pushes me past my risk inhibition. It has to be a really amazing opportunity for me to pull the trigger.

A pessimist’s view on position sizing

That number is pretty low for me. Use bigger numbers if you can tolerate more pain.

I operate with the same attitude when selecting my position sizing strategy. It’s important to make reasonable, yet pessimistic, assumptions when selecting your money management approach.

Step 1: Decrease the strategy’s accuracy by 5%

The rule generally holds across multiple instruments and time frames. Once you get a feel for the accuracy, you take the observed accuracy and subtract 5%.

The scalping strategy profited 75.93% of the time after including trading costs. Removing 5% off of that number leaves a reasonable worst case assumption of 70.93% accuracy.

This should make sense to readers with several years of trading experience. Range trades earn profits on the majority of trades. No individual trade contributes dramatically to the final outcome.

Trend trades do exactly the opposite. A small handful of trades contribute enormously to the overall result. The traders faces the risk of overemphasizing how well volatility played to his in advantage in the past. If trends of similar magnitude fail to materialize, the trader’s estimate for the R multiple will be wildly off the mark.

The adjusted numbers for the scalping strategy are 70.93% accuracy and an R multiple of 0.424. I can now take these numbers and start playing with the money management software.

The first thing that I did was to reduce the number of trades in the test to 100. That equates to roughly 1 year of trading, which is a meaningful period of time for this expert advisor.

Fixed fractional money management using 1% risk and the pessimistic assumptions puts the trader slightly ahead of breakeven after trading costs (a 1% profit). The worst case scenario shows an annual loss of 25%. Nobody wants a loss like that. But, it’s something that I can handle as a plausible worst case. 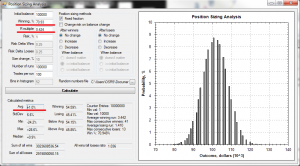 Increasing the percent number to 2% doubles the minimum and maximum outcomes. Tripling it to 3% triples the worst and best outcomes. You should select a number whose worst outcome strikes you as something personally acceptable to you.

I selected 1%. The worst case scenario is something that I can handle. The next step is to split the difference between the observed numbers and the pessimistic number for the percent accuracy and R multiple. 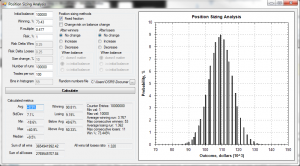 Moderate assumptions for position sizing show an average return of 8.9%.

Using fixed fractional money management squeezed more juice out of the orange. We brought the worst case scenario up to -25% and the best case scenario on moderate assumptions to over +40%. More importantly, the average return increases without affecting the best and worst cases.

What position sizing ideas do you have? Leave your thoughts in the comments section below. 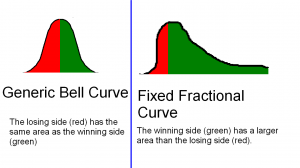