Dr. Van Tharp is famous for saying that a system based on coin flips can be traded profitably with good position sizing and risk control.

While position sizing and risk control won’t turn a poor system into a good one, they can improve a system that does have an edge. Adjusting the size of your trading to the current volatility of the market can have a dramatic impact on both total return and maximum drawdown. 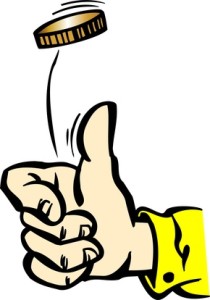 While there are multiple ways to implement volatility based position sizing, all of them are capable of outperforming a fix percentage position sizing strategy.

The goal was to compare the results of the different position sizing models against each other. The overall return of the system was not important because the numbers are only of value relative to each other. When compared to the fixed percent position size method, the number that the volatility-based approaches posted was very impressive.

Each of the volatility-based position sizing methods was able to outperform the 100% position size model in total return as well as maximum drawdown. The backtesting period started in January of 1993 and ended in mid-2012. The system was a long-only strategy that used four technical indicators with no stops or targets.

During that time, investing 100% of capital in each trade signal produced by the system would have returned a total of 204.24%. The three volatility based approaches returned 226.04%, 231.39%, and 232.25% trading the exact same system during that time period.

The 100% capital approach experienced a maximum drawdown of 19.52% while the volatility-based strategies had drawdowns of 18.6%, 18.31%, and 18.13%. As you can see, all three volatility approaches achieved higher returns with less risk.

I was initially curious as to how investing a different fixed percentage would affect the results. You could certainly reduce the maximum drawdown by dropping the position size to 50% of capital. Of course that would also dramatically reduce your overall return.

Therefore, we can achieve an improvement in maximum drawdown over the volatility-based systems at the cost of overall return. We cannot, however, achieve an improvement in overall returns of the 100% capital approach without increasing maximum drawdown as well. If we leveraged the account and traded 200%, we would dramatically increase our risk of ruin.

It doesn’t matter what fixed percentage is used to determine position size, the volatility-based approaches will outperform it.

The Realized Volatility position sizing approach outperformed each of the other two methods in both, total return and maximum drawdown. The author explains that the realized volatility is the realized standard deviation of returns over the last ten days multiplied by the square root of 252 to annualize the number.

In order to calculate the position size, you divide your target standard deviation by the realized volatility. This will give you the optimal percentage of capital for the trade. (The author was targeting a standard deviation of 11.5%, but used 17% to “overshoot” because the system was not always in the market.)

The underperforming volatility-based approaches were based on the GARCH model and the VIX. While all three of these models outperformed a fixed percentage position sizing method, I have to wonder if they are more complicated than they need to be.

I am a big fan of simple strategies. As a general rule, if I can’t explain or demonstrate a system to my mother, it’s probably too complicated. I would love to see how an ATR position sizing approach would have compared to these more complex systems. It would work on the same principle as these three methods, but is much simpler to explain.