If you were walking and randomly it started to rain, would you consider carrying an umbrella tomorrow? Of course you would.

The reason I ask a rhetorical question like that is when people observe a behavior, they respond accordingly. If they expect that something might happen again, they change their behavior to accommodate the change in outcomes.

When you think about forex robots, everybody has the dream of developing a strategy that works forever. It requires no changes. The initial settings always work. Turn it on and move to the beach.

Reality, of course, is more complicated than that. 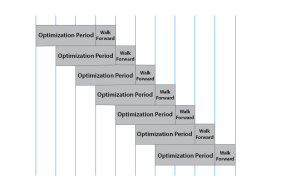 That leads to expectations of what you need to do when your strategy inevitably goes awry. It’s very possible that you come up with a strategy that works and does amazingly well on the current market. However, a past genius doesn’t mean future genius. There’s always the chance that your strategy will no longer work in the future.

Why is that? It’s the same reason that you might carry an umbrella tomorrow if it rains today. People observe the market performing in a consistent manner. As more and more people make the observation, people start trading on it.  The market responds to those changes, and eventually the opportunity completely washes out as too many people have eared about it.

The process of walk forward testing is very simple. You identify a set of information that you want to use for your testing and optimization. Using a real example, right now it’s the beginning of 2014. So maybe you want to look and test data from 2011 through 2012. That would be your in sample data, and then your out of sample data might be all of 2013.

In order to conduct a walk forward test, you would test and analyze your strategy 2011-2012. Then, to determine if it’s “not known to be bad”, you then walk forward to 2103 to see review the performance.

What you’ve done is a blind test. You didn’t know what how the strategy would perform in 2013 when you tested it in 2011-2012. By putting it on a blind sample, you give it the opportunity to fail.

The reason so many traders put their faith in walk forward testing is because it’s the absolute best tool to identify weaknesses in your optimization. When you’re testing a strategy, it is very likely that you’ve overfit to past opportunities.

Self feedback loops in the current market

Let me give you an example. In the current markets, a lot of traders have been banging gold on the market open where every day at market open., they sell as much gold as they possibly can. Sometimes it’s several multiples of the annual production in a span of a few minutes. What you see is an absolute freefall for five or ten minutes. That state persists for days at a time. But that doesn’t last forever. When enough traders start seeing that people bang gold on the open, they start doing the same thing.

Effectively, whoever wants gold to falloff on the market open has taught other traders to do that trade for them. As people expect gold to fall in the first five minutes of the open, they then change their behavior. Some try to jump on banging the open and go short.

Others start modifying their behavior. They notice that gold free falls for five minutes. Then, all of a sudden it stops, and more than like it reverts to the mean. They’ll start changing their tack and buying after so many minutes have elapsed from the open. They expect that the heavy volume that preceded the selling will eventually return to normal. As people change their behavior, other people respond in kind.

If enough people start selling on the open and then buying on the open five minutes later, you can see that a pattern is forming where one person responds to the actions of another. It’s a self feedback loop where the state that was working for the first couple of days no longer works in the future.

If you can identify a strategy that is able to survive those conditions, and is able to survive conditions where you didn’t do any testing and optimization, you give yourself better odds of succeeding in the future. It means that not very many traders have clued into this trading opportunity that you’ve discovered.

The approach to to walk forward testing is the antidote to the problem known as curve fitting. Curve fitting is the ultimate woulda coulda shoulda strategy.  It’s akin to opening a chart from yesterday and saying I would’ve bought here and I would’ve sold here, already knowing what transpired.

Curve fitting means that you’ve fit everything so perfectly to past market conditions that when new situations inevitably arise, sort of akin to the phrase, “history doesn’t repeat itself, but it rhymes,” your strategy does the same thing.

Rolling walk forward optimization takes the walk forward idea and continuously improves the strategy by exposing it to new data. So let’s say that you have a twenty four month sample period. One way to go about it would be to optimize your strategy for a period of two months, then to walk it forward to the third month. You observe the behavior and you reoptimize for the second and third month, then walk it forward to the fourth month.

By doing so continuously, you eliminate the decay time of the strategy and give it a chance to adapt to ongoing market conditions. It is sort of the redheaded stepchild to machine learning. Experience and losses give the strategy the opportunity to improve and adjust to the market changes through walk forward optimization.

The more degrees of freedom that you allow in a system vastly increases the chances 0f curve fitting your systems to historical data. The absolute best systems maintain twelve degrees of freedom or less. You want to find trading opportunities that have large numbers of trades and that offer performance that you find satisfactory.

Another element to consider in your optimization is what are you optimizing for.  Most people focus on the absolute return.  Returns are great, but most traders care much more about how they make their money instead of how much. Let me give you an example. If I had a system that made $25,000 last year, would you want it? Almost everybody says yes.

If I have a system that made $25,000 last year, but you had to lose to $15,000 before you made any money. Most people don’t want that system. What this means is that you care a lot more about the performance on a day-to-day basis rather than end result. The problem with optimization and even walk forward optimization is that you’re not necessarily focused on what you care about in the real world: the way that you’re making your money.

Most charting packages focused on the net outcome and that can cause some weaknesses in your system. If you’re range trading, what you’ve really done is cherry pick the results that are the least affected by substantial news. In effect, you’ve chosen the settings that have not yet been affected by fat tails.

If you’re trend trading, you’ve done the exact opposite. You intentionally pick the settings that maximize the fat tailes that have happened in the past. With trend trading strategies, you probably aren’t going to find consistent performance. Instead, what you’ll find is that the optimization frequently causes long, ongoing droughts of incessant drawdown. Then suddenly, almost out of nowhere, it finds a mega monster winner that returns several multiples of the drawdown that you experienced. This is fine for a hypothetical backtests, but in the real world where you’re suffering losses on a near daily basis, most traders can’t take the pain.  The weakness I find with most optimizations is that they don’t look at the consistency of performance. A potential substitute for optimizing a strategy would be looking at the linear regression of the equity curve over time. The best equity curve has the strongest linear regression slope. 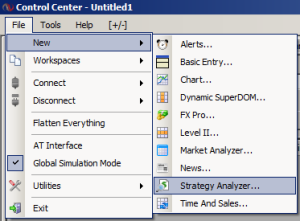 Open the strategy analyzer in NinjaTrader 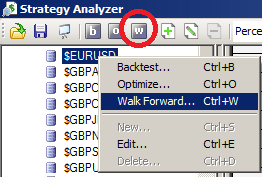 There are many ways to select walk forward optimization in NinjaTrader

The Walk Forward progress will be shown in the Status Bar of the Control Center.