One of the most frustrating situations for quantitative traders is a trade that moves sideways for an extended period of time. This type of movement never makes much profit and never triggers a stop, but it can tie up a trader’s capital for extended periods of time.

Trailing stops are designed to lock in profits as a position moves higher. They also offer insurance against a position moving lower. However, they don’t have a built in mechanism to handle positions that continue trading sideways. 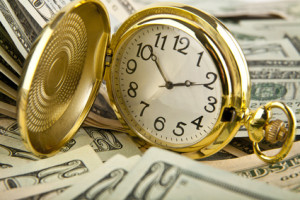 Introducing a time element to your trailing stops can help to make sure that your strategy isn’t wasting capital with positions that trade sideways for extended periods of time.

Daniel Fernandez recently wrote a post about a different type of trailing stop. While this new stop is built on a basic ATR multiple stop, Daniel adds a timing function that tightens the floor of the stop over time. This requires a position to perform or force an exit.

How Trailing Stops Are Supposed To Work

Setting an initial stop when a position is taken is first and foremost an insurance policy. If the new position is a loser right from the start, the stop represents the theoretical maximum loss. If the position hits the stop, an exit is signaled and the strategy takes a small loss rather than letting it grow into a large one.

On the other hand, if a position is a winner right out of the gate, the trailing stop will follow the position higher and theoretically lock in profits. This helps to make sure that profitable positions are not allowed to slide back into unprofitable territory.

While the position is trading in a sideways range, the trader’s capital is tied up in an unproductive trade. The longer the trade continues in a sideways fashion, the less likely the trade is to become profitable. If a position didn’t act like your strategy expected it to immediately, it is less likely that it will behave that way after a period of time has passed.

One way to be sure that trades aren’t allowed to continue moving sideways indefinitely is to introduce a time function to your trailing stop. Daniel suggests using a linear function that gradually raises the initial stop to the breakeven point over time. An even simpler option could be to require your strategy to move the initial stop up to the breakeven point after a period of time.

Either way, tightening the initial stop over time will force your positions to produce profits or signal exits. This will help your strategy avoid wasting time holding positions that never actually go anywhere.