The feedback on the group trading strategy was phenomenal! I’ve never had so many emails with such a broad range of opinions. Thank you to everyone for your response and thoughts.

Numerous people pointed out an obvious oversight on my part: which timeframe will the strategy use? Before you have a heart attack, please hear me out. Notice on the graph (republished below) that the curve really does not kick outward until 0.3% or more. On the current EUR\USD price, that’s a movement of 39 pips (0.3% * 1.3000). I used the M1 chart to create the graph. The strategy, too, will use the M1 chart for its signals. 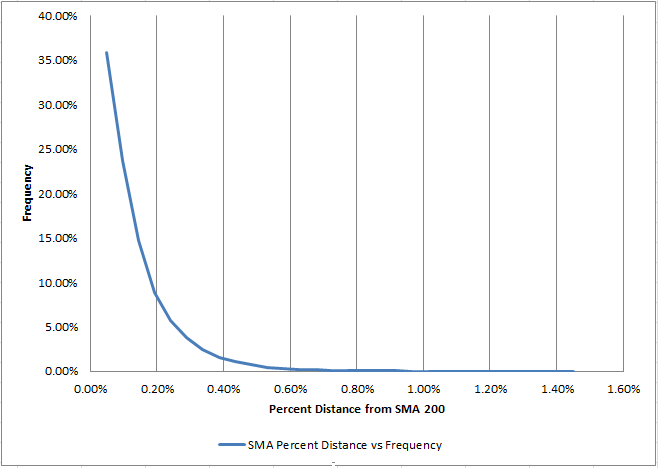 Another reason to consider the M1 chart is the number of trades per year. The average number of bars that the price spends above or below a 200 SMA is… 200 bars. This is based on research that I performed earlier this year. There are approximately 386,000 trading minutes per year. Divide that by an average of 200 M1 bars between crossings and you get a maximum of 1,930 trades per year (386,00/200).

Leave comments below if you see anything worth adding on the time frame.