One of the simplest goals for any quantitative trader is to outperform a buy and hold approach either through superior returns or reduced volatility. While many traders have more lofty goals, some traders are just looking for basic strategies to time the general market.

Last January, Mike from Don’t Fear the Bear published a simple strategy for timing the S&P 500 based on whether the Volatility Index rose or declined in the previous week. This year, Mike has added an acceleration measuring indicator that makes his simple strategy even more powerful. 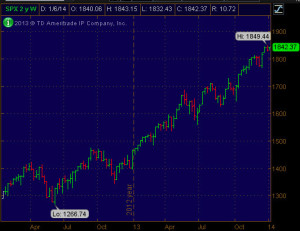 Mike has put together an impressive strategy that uses the Volatility Index to time the S&P 500.

The original post that Mike published last year contained the base strategy that times SPX based on whether VXO increased or decreased in the previous week.

In order to filter out some of the biggest losses that showed up in his backtest, Mike added a filter that required the strategy to stay in cash if VXO was more than 20% above its 5 week moving average. This resulted in a pretty impressive equity curve that significantly outperforms SPX, specifically during the crash in 2008.

Mike’s update to this system begins by explaining that many of the weeks where VXO declined were not very bad for SPX. By introducing an acceleration indicator, he is able to separate those weeks from the weeks that were bad.

The acceleration indicator, which he calls H/C, calculates each week’s high divided by the previous week’s close and compared those numbers week to week. He demonstrates through backtesting that weeks where VXO declines and H/C decelerates are actually still profitable. The weeks where VXO declines and H/C accelerates are where all of the major losses occur.

The fact that the weeks where the VXO declines and H/C accelerates are so terrible make them interesting short opportunities. Mike adds one filter to this short component by requiring that the previous week’s VXO close be above 19.

By pulling together each of these ideas, Mike is able to put together a pretty impressive strategy that does a fantastic job of trading the S&P 500 index.

If the VXO declines, the H/C indicator accelerates, and the VXO closes greater than 19, the new combined strategy takes a short SPX position.

The strategy remains in cash when the VXO declines and the H/C indicator accelerates if the VXO closes below 19.

Mike’s backtesting shows that this strategy has nearly doubled the return of the S&P 500 since 1986.